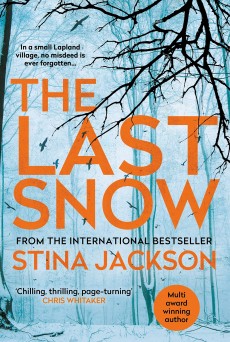 Liv Björnlund leads a lonely existence with her teenage son and elderly father in a small isolated village, far away in northern Sweden. When her father is killed, gossip about their dilapidated house and apparent hidden fortune intensifies as police search for the killer.

As an early spring still brings cold and snow to the small village of Ödesmark in the northernmost part of Sweden, there seems to be something different happening in a place abandoned by many of its inhabitants. Here the power of nature plays a significant role in the story of people. The isolated setting builds a unique environment for emotions. Those who stayed are consumed by curiosity about the strange Björnlund family of three. Liv in her 30s never left her home and remained there with her teenage son Simon and her elderly father Vidar. She is aware of local gossip but does not engage in any contact with neighbours, instead she goes to work at the local petrol station and then comes home, and nothing changes, apart from the seasons.
All the locals want to know why she hasn’t escaped into a bigger world, instead living in a derelict house with a despotic father who’s sitting on a small fortune, hidden somewhere at his property, after making many questionable business decisions over the years and many enemies in the process. That’s what they all say, anyway.
As nobody forgets anything, there are some people who are resentful and jealous. Then a man called Juha asks two local drug dealers, brothers Liam and Gabriel, to break into the house and get money from Vidar, something that is apparently rightfully his. The robbery goes wrong, Vidar dies, and the strained relationship between the brothers unravels. As the police searches for the killer, their investigation sends ripples through the small community, and affects Liv who now starts to question her life, something she didn’t dare do while her father was alive.
Chilling flashbacks to 1998 and the early 2000s initially seem confusing, but as the story slowly develops, they provide background to what might have been happening in the area, and why Liv’s life became what it is now - a monotonous existence within the confines of abandoned dreams and desires. Of course, it takes time to realise how the memories of a forlorn reckless girl from the past and the reality of the lonely woman in the present fit together. But the process of understanding this connection adds to the overwhelming sense of sadness and regret, and keeps the reader absorbed in a hypnotic state.
The Last Snow is Stina Jackson’s second novel, following the success of her debut The Silver Road. Jackson is a talented, intuitive storyteller, able to create a haunting, sorrowful atmosphere and provide an evocative tale of grief and hurt, aided by Susan Beard’s sublime translation.
The slow, mesmerising narration takes in the perspectives of Liv, and also Liam, who begins to cut ties with Gabriel and rebuild his life for the sake of his small daughter. Through their experiences Jackson also analyses difficult relationships between fathers and daughters, and how the family ties are so much stronger when loneliness stops people from what they really would like to achieve, even on lowest personal level. The Last Snow’s finale is both shocking and desperately poignant, and one that won’t be easily forgotten.