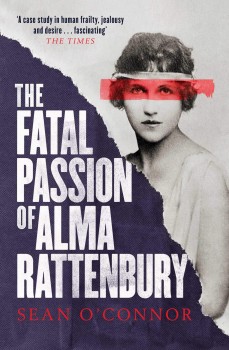 The Fatal Passion of Alma Rattenbury

An immaculately researched re-examination of one of the most sensational Old Bailey murder trials of the 20th century.

Theatre, radio, television and film writer, director and producer Sean O’Connor  made a switch to true crime writing in 2013 with Handsome Brute, an in-depth study of the 1940s psychopathic serial killer Neville Heath, whose second victim was tortured, raped and murdered in a Bournemouth hotel.

He returns to the wealthy seaside resort for this meticulously researched and exhaustive re-examination of one of the most sensational murder cases of the 20th century, the 1935 killing of  the famous Canadian architect Francis Mawson Rattenbury.

The prosecution alleged the depressive Rattenbury, who had talked about suicide, had been fatally clubbed in his own drawing room by his much younger second wife Alma and her teenage chauffeur lover George Percy Stoner.

The trial at the Old Bailey was one of the great newspaper sensations of the interwar period with its stories of adultery, alcoholism and drugs. Alma, the glamorous femme fatale, dominated the front pages for months – sharing the headlines with the rise of Hitler and the launch of the new superliner Queen Mary.

Such was the public fascination the case sparked a series of books and plays was used as the basic plot for several major Hollywood films. But O’Connor’s account must be considered the definitive version. With such a depth of research, new evidence and wealth of fascinating period detail, this study in human weakness, jealousy and desire is as enthralling, provocative and moving as any work of fiction.

From its beginnings in the 1880s south London slums, to the wild but rapidly growing Canadian province of British Columbia, to its bloody climax in an English seaside resort, this is a gripping tale murder and almost heart-breaking romance.

It is also the biography of a hugely gifted woman ahead of her time who matured from a child violin prodigy playing with established orchestras in major concerts and later a successful composer of popular songs to a war heroine serving in front-line hospitals in France – a free spirit trapped and suffocated by the conformity of peacetime.

O’Connor retraces her life with scrupulous attention to detail, offering a prescient parable for our times. This is the story of a highly strung woman who challenged the status quo and was crucified by public opinion, pilloried by the press and punished by the phoney Victorian values of a male dominated British legal system.

Because of his forensic backgrounding of every major character, O’Connor’s account can at times be rather heavy going – detail about the growth of railways in Canada, the popularity and social significance of radio and lending libraries may seem a little superfluous to some readers – this is nevertheless a gripping and enthralling examination of the facts.

The pace picks up with the introduction of the main characters and becomes a dense web of perplexing actions and reactions. Why did Alma admit the killing before eventually incriminating Stoner with her testimony? Did she actively aid and abet him, or was she an unstable, bewildered and frantic widow?

There are also questions about why Stoner, who claimed drug addiction, did not give evidence in his own defence, or implicate Alma after her suicide. Was he an ingénue dazzled by the charms of an older woman, or a brutal and impulsive killer who felt he had been some way humiliated? All these possible subtleties and subplots are explored in lucid, well-ordered fashion which is never allowed to become bogged down in complex legal argument.

The trial was haunted by the not dissimilar case of Edith Thompson thirteen years earlier. If Thompson, who went to the gallows, was the Emma Bovary of the bourgeois London suburbs, then Alma was Lawrence’s aristocratic Lady Chatterley with her ‘rough trade’ lover.
The same judge, Sir Gordon Hewart, later Viscount Hewart, had dismissed Thompson’s appeal as a ‘squalid and indecent tale of lust and adultery’. As Lord Chief Justice he took just 15 minutes to dismiss Stoner’s appeal against sentence and conviction – although he was later granted a Royal pardon after a petition signed by more than 300,000 people. After his release from prison, Stoner and his family were pursued by the press until his death in 2000.

It is undisputed that women in the dock accused of capital crimes aroused strong passions and were often judged harshly and crucified in a sensationalist press geared to the prejudices of the ‘respectable’ middle classes. Alma Rattenbury was certainly one such. But in this outstanding piece of historical true crime writing she emerges as a figure who should have been shown compassion rather than the shocking and often offensive public opprobrium that ended only with her suicide – an act as spectacular as her life.