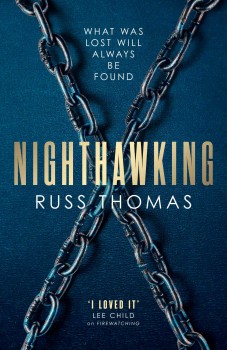 The discovery of a young woman’s body in a shallow grave leads DS Adam Tyler into the murky world of the nighthawks – metal detectorists who aren’t too fussy about whether they have permission for their investigations.

The discovery of a young woman’s body in a shallow grave in the beautiful and usually peaceful setting of Sheffield’s Botanical Gardens is surprising enough but finding her with two rare Roman coins over her eyes gives the burial a macabre touch. When it is established that death was from a stab wound, the case is quickly classified as murder.

The body is believed to have been there for several months and when the woman’s identity is discovered, DS Adam Tyler of the cold cases unit finds himself with something of a diplomatic headache on his hands, and pressure from his bosses to tie things up quickly.

As Tyler delves into the murky world of nighthawks – metal detectorists who aren’t too fussy about whether they have permission for their investigations – he’s also ploughing his own furrow on the side, delving into the death of his father. Tyler is not convinced that his father, a serving police officer, committed suicide, nor is his entertainingly acerbic boss, DI Jim Doggett.

Tyler’s obsession with is father’s death and his habit of working all hours with little thought for anyone else is taking a toll on his private life and his boyfriend is getting very sick of being stood up for another date with the Job. And Tyler’s habit of disappearing during the day without explanation is also putting a strain on his relationship with newly-minted DC Mina Rabbini, as she’s invariably the one who ends up having to cover for him when DCI Diane Jordan is on the warpath.

Russ Thomas served up a very capable debut in Firewatching and on the strength of DS Tyler’s first outing, I was very happy to come back for more. The characters are likeable – something that is getting rarer by the day in crime fiction – and they’re refreshingly free from quirky names and even quirkier personality traits. Apart from Tyler’s obsession with his father’s death, he’s not carrying too much baggage around with him, and it says a fair amount about the current state of the genre when that’s considered almost hand-luggage at the weigh in desk.

The plot hangs together well, and I enjoyed trying to work out the motivations of the killer and how this fitted in with the discovery of Roman coins by someone in the detectorists’ club. Thomas keeps an air of mystery without making things over-contrived. Characterisation is a strong point, and Mina Rabbini is great. She’s an interesting mix of gutsy and insecure. Race and religion aren’t her defining features, nor is Tyler being gay the main thing about him.

For anyone looking for a strong police procedural with a diverse cast and an over-arching mystery, then Nighthawking is a great addition to a reading pile.