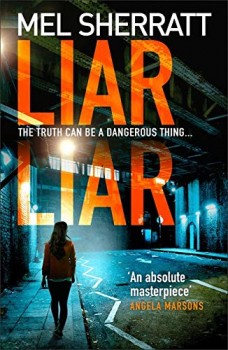 When a child is injured falling from a block of flats, DS Grace Allendale has a strong feeling that it wasn’t, as the parents claim, an accident. But proving who is lying and why isn’t an easy task.

DS Grace Allendale of the Stoke-on-Trent Community Intelligence Team is carrying out her last call of the day at Harrison House, a run-down block of small flats arranged around a central courtyard, when screaming alerts her to an accident nearby. A young boy has fallen from the walkway on the first floor to land five metres onto hard ground.

His distraught parents, Ruby Brassington and Luke Douglas, have no idea how the accident happened. They thought the child, Tyler, was with his older sister. Grace has her suspicions, though, that the accident might not have been quite as simple as Ruby and Luke are making out and she senses they are lying to her, but she knows taking a head-on approach will only make them clam up. None of the residents of Harrison House seem to want to talk to the police and no one will admit to having seen anything. The area is riddled with drug-related gang violence.

The police have had their eye on Seth Harrison for a while. He lives on the same floor of the flats as the injured boy. He’s also a known associate of criminal brothers Eddie and Leon Steele and is believed to be heavily involved in all manner of dodgy dealings. Grace has her own history with the Steeles as well. She’s their half-sister but does her best to put as much distance between her and them as she can.

Liar Liar is a tangled and depressing story of gangland crime and its effect on the lives of those caught up in it, where one job leads to another and yet another, with no end in sight and no way out of the cycle of poverty and crime. Debts mount up, spiralling out of control along with the interest. Women are little more than commodities; threats are reinforced with the business end of a baseball bat and kids barely into their teens are used as runners for the ever-present drug pushers.

Ruby Brassington’s story is told in the present day and in a series of flashbacks to her as a 16-year-old hooking up with Finn Ridley, three years older than her, with a car and his own flat. Ruby gets pregnant a year later and, still in love with Finn, decides to keep the baby. Despite his promises to go straight, Finn never succeeds, only ending up deeper in debt to his criminal masters. The worst thing about the story is seeing Ruby’s naïve optimism finally being crushed, but until later in the story, how Ruby gets from one child with Finn to another with Luke doesn’t become clear.

Mel Sherratt does a good job of getting under the skin of her characters. They’re all real people, whether you like them or not. Grace and her police colleagues come over as decent coppers doing their best despite finding it almost impossible to take down the criminals that have such a stranglehold on their town. There’s very little light in this particular dark corner and the book’s certainly not going to put Stoke high on the list of tourist destinations! But if gangland crime is your bag, then Sherratt delivers a competently written, complex plot that builds on Grace Allendale’s backstory and provides some satisfactory character development. I did, though, feel the need to read something marginally less depressing afterwards to lighten my mood after a trip down the mean streets of Stoke.