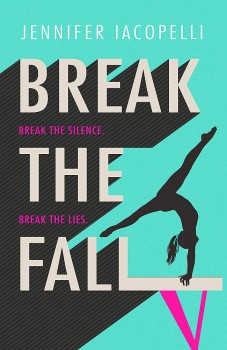 Audrey Rey is a young gymnast with her sights set on the Olympic Games in Tokyo. But her back injury is a complicating factor and then the ultimate shock rocks the team when one of the girls fails a drugs test and their coach is accused of sexual misconduct.

Seventeen-year-old gymnast Audrey Lee has her sights set on winning an Olympic gold medal in the Tokyo games, but years of pushing her body to the limits have taken their toll. She’s fought her way back to top form after a back injury looked set to ruin her prospects, although at times it seems that the only thing standing between her and failure is a cortisone injection to help relieve the pain.

Competing at the Olympic Games would be the pinnacle of Audrey’s career and it’s what she wants more than anything in the world. But first she has to compete for a place in the team, along with her best friend, Emma. Their coach will pick the four girls he believes will make the strongest team, with two substitutes chosen in case any of the girls is no longer able to continue. The competition of fierce, with so little to choose between any of the girls.

To Audrey’s delight, she makes it onto the team and it seems that her ultimate ambition is now within her grasp. Then everything she’s worked for starts to unravel when one of her teammates is ousted after failing a routine drugs test and hard on the heels of this, the same girl makes an allegation of assault against Coach Gibson and the girls’ world is turned upside down.

Matters soon taken another turn for the worse when their individual coaches are also removed from the team amidst allegations of possible bias. Audrey’s world seems to be collapsing around her, as the formerly close-knit team starts to fall apart when Dani is cleared of the allegation of having taken performance-enhancing drugs and returns to take her rightful place in the competition.

Half of the girls on the team believe Dani is telling the truth about Coach Gibson, the other half – including Emma – don’t. For the first time, there’s a rift between Audrey and Emma that neither girls know how to bridge, and with the Games getting every closer, they need their whole focus to be on gymnastics.

I’ve never been much of a fan of competitive sports, and my knowledge of gymnastics starts and ends with Olga Korbut, but despite that, Break the Fall hooked me from the start. I liked Audrey, empathised with her pain and wanted to see her succeed in her ambitions. I also liked teammate Dani and was positively willing the other girls to get behind her. Accusations of sexual misconduct aren’t unknown in the world of sport but always lead to this sort of situation where the complainant is the one who seems to be ostracised.

Break the Fall is a story of the power of friendship, with its ability to make or break lives, combined with a penetrating look at the world of elite athletes and the rigours they face to succeed in a world where one tiny slip can bring ambitions crashing down. The gymnastic sequences were well-described to the extent that even an outsider to the sport like me was able to follow the sequences in my mind’s eye as one move flowed into the next with the same power and grace as Jennifer Iacopelli’s writing. The book is also a story of how women can ultimately stand together with the eyes of the world on them, despite the divides of the ultimate competition.

This is top-class YA writing that sucked me in and kept my interest – and reading about the Olympic Games was, for me, every bit as exciting as watching them.