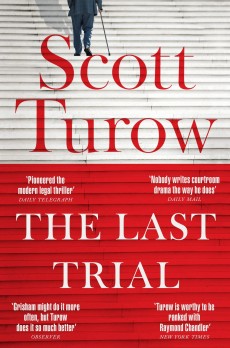 In his last trial, Sandy Stern and his daughter Marta defend a Nobel Prize-winning doctor against accusations of fraud and murder arising out of the marketing of a new cancer medication.

Alejandro ‘Sandy’ Stern has appeared in all of Scott Turow’s novels. Now, at the age of 85, he agrees to take a last case, largely because his client developed the medication g-Livia which shrunk his cancer and saved his life. Sandy is only too aware of his frailty, and shares the workload with his daughter Marta, also a skilled trial lawyer.

The book is almost entirely placed in the Kindle County Federal courtroom, where Kiril Pafko faces charges arising out of the testing and marketing of g-Livia. According to the prosecutor, Pafko falsified records to conceal deaths during trials for the drug and profited from sale of stock in his company in advance of the collapse in the share price on release of news about the deaths.

The government’s case is founded on FDA regulations and upon rules governing insider trading, both of which involve complexities likely to baffle the untrained reader, but Turow does a masterful job of cutting through red tape to reveal the essentials. As with his explanation of the law and court procedures, the detail sometimes calls for concentration but amply repays the effort.

The sophistication of Stern’s expertise after more than 50 years as a defence lawyer is reinforced by the resources available to a rich client which, for example, enable mock trials to be held in advance of the case proper and war-gaming with several experienced lawyers to refine strategy. Turow includes in Stern’s deliberations personal insights arising from the past interactions between the counsel for both sides and the judge in the course of parallel careers in the same city.

The implications of progress in court are underlined by Turow’s exploration of family dynamics, both for Pafko, his equally genius son and various mistresses, and for Stern himself as he looks back on two marriages and muses on the varying degrees of affinity he feels for his own relatives. The leading characters are both immigrants from Argentina for whom early experience has been key to their attitudes to life.

Stern’s strategy is complicated by his client’s refusal to engage on certain critical parts of the government case, and his insistence on giving evidence on his own behalf. For much of the time, therefore, Stern is fighting with one hand tied behind his back. Even when the case comes to a conclusion, uncertainties remain, and it is only with the help of Sterns’ punk granddaughter that the truth is finally revealed.

The various dimensions to this book are bound to give it wide appeal; for those who like courtroom drama it is just the best. Twists and turns, baffling gaps in the evidence, breathtaking revelations from the dock and brilliant oratory, are all delivered with a confidence and affection derived from the author’s life in the courtroom.