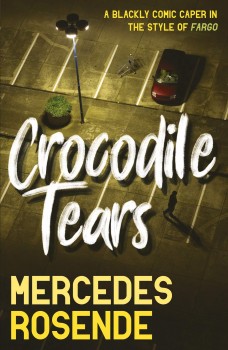 Diego is grateful to be released from prison when the wife of the man he kidnapped declines to identify him. Unfortunately, his freedom comes with demands quite beyond his capacity.

This excellent tale is set in Montevideo where the action is seen through the eyes of the chief players, although the narrator is conspicuously standing at their shoulder offering asides highlighting the peculiarities of the situation, or of the character she is describing, to amusing effect.

The men in the story are universally incompetent. Diego, the first we meet, is in prison after being arrested, asleep, together with a man he has kidnapped. The jail is a terrible place and Diego is greatly relieved to secure an early release, although puzzled as to why Ursula Lopez, wife of his victim, should decline to offer any evidence to his detriment.

Unfortunately, his lawyer Antinucci has demanded as a price of his freedom that Diego should participate in the hold-up of an armoured truck, in the company of the Hobo, a fearsome psychopath. Antinucci, always immaculately dressed, driving a spotless car and regularly at mass to ensure his soul is equally clean, has had a delivery of heavy weapons flown in to ensure the heist goes without a hitch.

Antinucci has also taken care to obtain the cooperation of the police, and is not concerned when Captain Leonilda Lima, the apparently sole honest officer, is the first at the scene after the event. Lima is sidelined by her superiors but has a shrewd idea as to what has been going on and manages to keep in touch when the police follow the stolen money into town.

By this time the cash is in unexpected hands, including those of Ursula Lopez, a woman of unexpected resources as well as a rather alarming history. Lima is on her trail but temporarily confused: Ursula Lopez was recently shot and killed, and surely there cannot be two women of such an unusual name in Montevideo?

The quality of the writing particularly emerges in the way the author gives the picture from different perspectives but leaves various connections to be made. So how the story hangs together does not become entirely clear until the final pages, when illumination gives great satisfaction as key facts fall into place.

It is also difficult to resist the funny side of the author’s penetrating insight into the motives and behaviour of her characters, which come across as absolutely genuine. The portrait of Montevideo is hardly a flattering one, a picture of incompetence and corruption, great disparities in wealth, crumbling infrastructure and all the rest of it. The reader will find it easy to absorb the background, however, so mesmerising are the characters and the action.