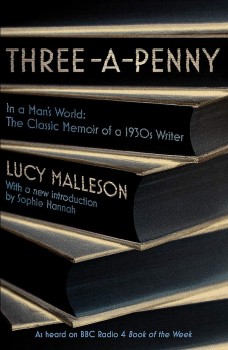 A fascinating insight into a woman ahead of her time during and after World War I and how she was forced to pose as a man to establish a career as a crime writer.

This former Radio 4 Book of the Week is a fascinating insight into the life of the much under-rated Lucy Beatrice Malleson and what it is like to be a woman in a man’s world, especially with the added ups and downs of earning a living as a writer in the 1920s and 30s.

Malleson, who wrote more than 70 novels, was part of what is often referred to as the Golden Age of crime fiction. But in order to be published she was forced to use a male pseudonym, and successfully concealed her true identity for many years – once even disguising herself with a wig and man’s clothing for a cover photograph!

As Anthony Gilbert and J Kilmeny (a pun on ‘kill many’) Keith, and later when she finally admitted her deception, as Anne Meredith, she published a string of clever, but never hugely successful books – her best known are perhaps the Arthur Crook detective series – through the 1930s, 40s and 50s. She died in 1973, aged 74.

The Golden Age saw a public traumatised by one major conflict, impoverished by an economic collapse and terrified by the prospect of another war, turn en-masse to detective stories to calm these fears. Plots which ran like well-oiled clockwork made violent death explicable and logical, in stark contrast to the slaughter in the trenches. By the end of the book, justice prevailed, order was restored and the murderer dispatched. Wit was prized over profundity, ingenuity of plot over characterisation.

There are thousands of out-of-print novels by forgotten authors – until recently Malleson, although a well thought-of member of the elite Detection Club and championed by Dorothy L Sayers, was one.  Many of those pioneers from the years between the two wars have been resurrected, largely due to the work of the British Library Crime Classics series. The re-issue of her 1933 Portrait of a Murderer sold far more copies than the original!

This reissue of her 1940 autobiography, with a useful introduction by Sophie Hannah, is something of a revelation and provides an insight into a different perspective on being a woman trying to make a living through writing crime in those often traumatic days.

This classic memoir by a feminist with a social conscience far ahead of her time is not only an insight into what life was like for a determined woman living and working in a largely male world, but is also full of poignant comment on both the hardships of life in London’s East End, as well as the collapse of the comfortably-off middle class, of which her family was a part, through the social upheavals of war and Depression.
Written with confusion, anger and plenty of humour, this superb depiction of a topsy-turvy world sees Malleson emerge as sympathetic, charming, surprisingly modern, yet wise and endlessly funny – particularly on the subject of men!

If it succeeds in opening readers’ minds to the realities of the so-called Golden Age and starts them searching for her work or its reissues, it will be no more than Malleson deserves.