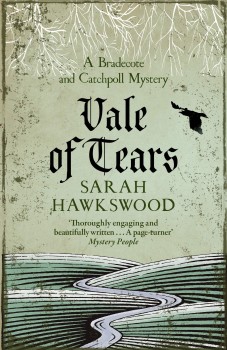 A wealthy horse dealer is found dead in a mill leat. He was stabbed, but not robbed. Under Sheriff Hugh Bradecote, veteran Sheriff’s Sergeant Catchpoll and his young trainee Walkelin face a series of mysteries as their investigations go far beyond the obvious to a web of greed, obsession and murder.

Worcester’s Under Sheriff, Hugh Bradecote, hopelessly inexperienced on appointment and given to a young aristocrat’s assumption that rank equals knowledge, has rapidly matured to an intelligent and shrewd investigator, although is still occasionally prone to allow emotion to overrule logic.

Veteran Sheriff’s Sergeant Catchpoll, a close-mouthed, irascible hard case, who hides his more gentle feelings behind a grim exterior, has gradually warmed towards his superior as Bradecote has grown into the role – even adopting some of the tricks which have made the sergeant such a feared enforcer of the law.

Now the third member of the team, the young former man-at-arms Walkelin, is beginning to play an increasingly major role. Selected for his sharp intelligence by the ageing Catchpoll to become his eventual successor, he faces the hardest adjustment of all as he must learn to express himself as he also learns to deal with a rigid feudal hierarchy.

The trio are called into action in the spring of 1144. The body of a wealthy Evesham horse dealer is found floating in the Fladbury mill leat, stabbed but not robbed. Did his beautiful and unfaithful young wife or one of her lovers get rid of him? What is the connection with the Norman lord of Harvington, a man of fierce temper and contempt for any other law than that of the sword, obsessed with his mourning of the dead man’s sister – and could there be any doubt about her accidental death in a fall?

There are also questions as to why the lord employed a defrocked monk to work on leases confirming his ownership of land disputed by the church then hanged the man for theft. Finally, where is the horse dealer’s valuable and physically unmistakable mount?

The trio must work together to unpick the thread which links seemingly disparate deaths before more people die. In the process all are put in jeopardy, particularly Walkelin, who finds himself framed for murder and awaiting death by hanging.

This, as readers will have come to expect, is as much a tale of personalities, relationships and ambitions as it is of murder, and Hawkswood’s ability to bring even her most minor characters to vivid and realistic life again gives it a must-read quality.

There’s no lack of suspects, all well-written characters, who provide a fascinating insight into time and place, but it is the carefully explored relationship between husband and wife that is central to a convincing and suspenseful plot.

The writing is crisp and descriptive, the sleuthing well done, as the three detectives move among the Avon communities starting in Fladbury and ending at the Sheriff’s Castle in Worcester.

Hawkswood’s elegant and carefully chosen prose will draw you into this medieval whodunit as she switches between action, reflection, deep personal feelings, description or even repeated gossip. Historically, her research is unimpeachable – even to an explanation of the then current myth that bathing was dangerous to health – and it is perhaps fortunate that her ability to create a totally believable alternative reality does not extend to smell!