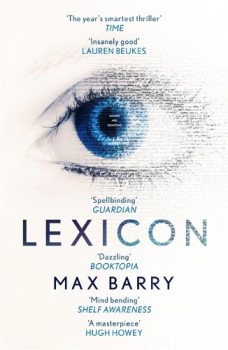 The Australian mining town of Broken Hill has been wiped out. The government blames environmental disaster, but a few people know the truth.

Forty years ago a doctor, an amateur film-maker and a tyro screenwriter combined to produce the dystopian and hugely lucrative world of Mad Max where the oil had run out. Now another Max appears with a vision of a world in which a single word can kill.

Max Barry is no amateur working on a low budget movie. One of his three previous books is in production by a major studio and he has also created a successful online political simulation game. Now he brings all his skill to bear on a spectacularly fast-paced and inventive cerebral thriller that grabs you from the opening lines and never lets go.

Lexicon doesn’t fit easily into one particular genre. Almost a parallel society sci-fi thriller, almost a gripping chase story, almost a tortuous tale of love, it could also be seen as a polemic against the growing tendency of government and big business to influence our thoughts and actions by playing with words to produce suggestions which we willingly accept rather than facts. With its references to Egyptian mythology, the Dreamtime tales of the Australian aborigines and the Old Testament story of the Tower of Babel, it has an eerily credible tone.

The New South Wales mining town of Broken Hill and all its inhabitants has been wiped off the map by an unknown disaster. It is still instant death to venture inside its boundaries. The government offers a plausible explanation to satisfy the masses, but a few people know what really happened.

Emily is one of them, a member of a devastatingly powerful and ruthless cult, who all take the names of famous poets and who use the power of language to bend others to their will. But Emily has made an error which leaves the Poets hunting her – she has fallen in love. Wil Parke also knows the truth – but he can’t remember it. Nor does he know why he is immune to the powers of the Poets. All he knows is that they want to kill him and he must run – back to where it all began.

Lexicon has a cast of compelling characters with a devilish plot that races from a brutal start to a shocking but satisfying finish, combining the in-depth invention of an Isaac Asimov with the pacey action and dry, often black, humour of an Elmore Leonard. It is as good a one-off thriller as you are likely to get and is a great and thought-provoking read.