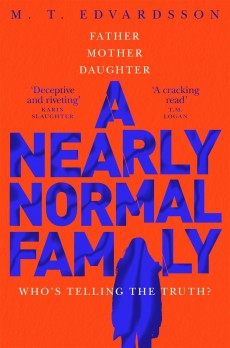 When 18-year-old Stella is arrested for the murder of a rich charming businessman, her pastor father and lawyer mother are desperate to fight for their daughter and to do anything possible to stop destruction of their family. But the lies and the truth might be too much for them.

The Sandells: Adam, Ulrika and Stella. A perfectly ordinary family. A pastor, a lawyer and their 18-year-old daughter. They are happily settled, working and enjoying life in Lund, with a great circle of friends, the respect of the community and no major issues that anyone outside the family would know much about. Upsetting things that have happened don’t need to be made known to outsiders.

Of course Adam might have been too controlling about Stella, Ulrika too focused on her career, and the teenager too reckless and too independent but that’s fairly typical these days. Then the body of 32-year-old rich businessman Christopher Olsen is found in a local playground. When the police arrest Stella and accuse her of murder, the family’s whole world is turned upside down. Shock, disbelief and grief follow, along with an abundance of questions, and lies, both new and old, come to the surface.

Adam, convinced that his daughter has been framed, cannot understand the accusations, can’t accept the possibility that she might be a murderer and so he tries to pursue all available avenues to find a solution to this tragedy, which in his eyes would mean rescuing Stella from the police cell. His vocation forgotten, he behaves unreasonably (visiting a witness, trespassing and a near-assault) yet all this seems logical in his desperation.

Ulrika, a high-flying defence attorney, knows all that there is to know about the Swedish legal system and how people are influenced by opinions. She believes that her daughter is hiding something awful and destructive, and that the chasm that has opened between them in the recent years only shows her failure as a mother. However, she will fight for the family, rejecting her professionalism and integrity.

And then there’s Stella, a young woman on the brink of adulthood, bored to her back teeth by the constraints of life, eager to experience more of the exciting things that might await during a trip to Asia. Her best friend Amina seems to be the main constant since her early childhood, and that significant friendship is both wonderful and utterly painful. Both of them feel trapped by having the experience of knowing the charismatic dead man.

MT Edvardsson weaves three separate strands, told from three different perspectives, into a powerful and poignant portrait of a modern family, shaped by various preconceptions and expectations. His firm grasp of social attitudes is a solid background to give an astute analysis of what makes people react in certain ways. He creates a very compelling and ultimately heartbreaking story, with tension, surprises and excellent narrative pace. I really enjoyed how the moral dilemmas played out in the novel, especially as both parents hold the same view yet don’t seem to be able to protect their loved ones

A Nearly Normal Family, beautifully translated from Swedish by Rachel Willson-Broyles, is a decent psychological mystery with nuanced relationships between parents and their children with the addition of complicated legal thinking not based on concrete evidence, because the murder weapon has never been found.