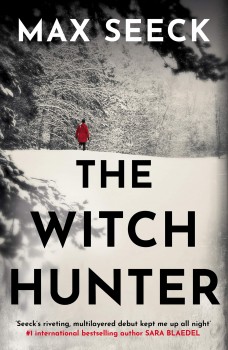 Detective Jessica Niemi begins a complex investigation into a brutal ritualistic murder of Maria Koponen, wife of the famous writer Roger Koponen who’s fascinated by occult and witch hunters. As the body count in Helsinki increases, Jessica realises that the killer’s motives might be personal.

Maria Koponen, wife of famous thriller writer Roger Koponen, is found dead in their impressive home on the waterfront in Kulosaari, a beautiful district of Helsinki. Her body is dressed in a black evening gown, placed on a chair by the table and posed in a way that made the police believe a strange ritualistic murder had taken place. The overall effect is truly terrifying and no doubt so intended. An elderly neighbour had invited police to her towering house to see a message in Latin on the roof of the victim’s house.
As Roger was hundreds of miles away at a book event at the time, he is not a suspect, and within hours he dies in a car accident. He becomes an unusual source of information – his trilogy on gruesome witch-hunting in modern times turned into a worldwide success and earned him both money and dedicated fans.
Dedicated detective Jessica Niemi is in charge of the investigation and begins the search for a serial killer. She is immediately drawn into a high-profile drama, having a strange sense that the killings are somehow connected to her. She tries to dismiss this feeling and focus on possible suspects in a very convoluted case where some people do not appear to be who they really are. Her conviction that Roger’s books might hold motives soon turns into a reality.
The whole team becomes familiar with his occult ideas and descriptions of other horrendous murders while another body is found, under the ice close to Koponen house. They believe that imitations from the fictional work will keep appearing. The list includes poisoning, stoning to death, stabbing and burning – methods used mostly in the Middle Ages to test women accused of witchcraft.
Jessica, her boss Erne and colleagues race against time to save women that might be targeted as modern witches, without realising what makes them vulnerable in the first place. This is not completely clear until the absolutely shocking finale with the discovery of the disturbing truth of what has been happening over the years.
Max Seeck’s debut thriller The Witch Hunter in Kristian London’s translation is an interesting novel that veers between full-on horror and a solid police procedural, with a huge dose of supernatural goings-on and an undercurrent of mysticism. Both the protagonists and the readers have to navigate the twisty and intricate web of connections.
The author creates a truly unsettling portrait of a group of people who have established their own moral code, which begs a question whether it is extraordinary or mad. Jessica’s personal story is thought-provoking, too. She’s a determined professional who doesn’t share her private life with anyone and keeps her heritage and wealth hidden from others. Her only close connection is with Erne and is built on deep trust and tinged with sadness.
I enjoyed the strong sense of place as cold snowy Helsinki is a character in its own right and the darkness of winter and minds, mixed with confusion and the unsettling atmosphere is carried throughout the tale. The tension doesn’t let go from the first page, and the narrative moves between the current hunt for witch hunter(s) and Jessica’s painful past and tumultuous relationship with an Italian musician in Venice. That brutal love story shines a light on the person who might now be the new fictional detective to watch.