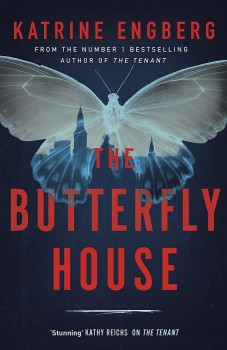 A body is floating in the waters of an historic fountain, right in the centre of Copenhagen's main city square. A body that's been drained of all its blood. So begins a new and gruesome case for Investigator Jeppe Korner and his assistant Anette Werner.

A paperboy, on his early morning round, discovers the naked body of a middle-aged woman floating face-down in the fountain of Copenhagen's old market square. Her wrists and left thigh are marked with small incisions and it becomes apparent that death was due to exsanguination – the draining away of all of her blood. Clearly, she had been meant to suffer.

The investigation is led by Jeppe Korner, an interesting character. He is newly divorced, temporarily living with his needy mother whilst pursuing a tentative relationship with Sara, a fellow investigator. Jeppe's usual work partner, Anette Werner, is on maternity leave but she is finding it hard to settle down to life with her new baby daughter and she can't resist getting involved, unofficially, with this latest investigation.

The USP of this well-written thriller is that it takes the reader into some of the darker and more disturbing aspects of the world of psychiatry. When more murders are committed using the same bizarre methodology it seems that the targets are amongst the ex-staff of the now defunct Butterfly House – ostensibly a care-giving institution for disturbed young people. And that the killings are meticulously planned, cleverly executed but ultimately the product of a deranged mind.

Just the right number of suspects are lined up, all with a grudge against the regime of the Butterfly House, and the identity of the murderer is satisfyingly withheld until the final pages. But not before Korner and Werner have both been placed in mortal danger.

There are several interesting sub-themes in this book covering a variety of mental health issues which neatly dovetail with the main plot. An unnamed nurse is stalking the wards of one of Copenhagen's main hospitals, a syringe filled with an overdose of heart medication in her hand. A lonely elderly woman becomes involved with her new neighbour who may or may not be a suspect in the blood-letting case. Investigator Korner's own mother is suffering from feelings of uselessness and neglect (she rings him several times a day) whilst he struggles with his own feelings for mother of two Sara and the question of to commit or not to commit. And detective Anette Werner wonders if she will ever be the wife and mother she wants to be when she just can't feel the right emotions.

The is the second crime book by Katrine Engberg and from her acknowledgements it seems she has done her research into paediatric psychiatry. Intriguingly, Katrine is a former dancer and choreographer. Her first book to feature Jeppe Korner and Anette Werner, The Tenant, is now high on my reading list!