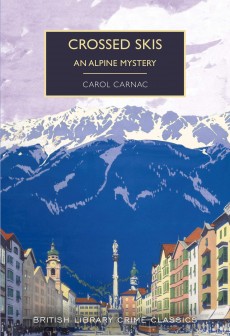 When the victim of a ruthless murder is found in a room at Mrs Stein's guest house burnt beyond recognition, little remains in the way of clues – except the distinctive impression of a ski stick left in the mud outside the front door.

Crossed Skis – An Alpine Mystery was originally published in 1952 as an imprint of the Collins Crime Club. The author, Carol Carnac, was one of the pennames of crime writer Edith Caroline Rivett. 1952 is not a long way off the year of my own birth and I consider myself to be a baby boomer growing into adulthood as an enthusiastic member of the swinging sixties.

So it always comes as a little shock to read books like this, set in the 1950s, where life seems so old-fashioned compared with what was to come in the next decade. There is a cosiness to this story, although it has a grim death at its heart, a sort of famous five for grown-ups where 16 people go on a skiing trip to the Austrian Alps and one of them is a murderer.

The skiing party consists of eight young women and eight young men off on a jolly escape from the dreary post-war world of London with its rationing and fog. Page two introduces us to a character called Biddy, so you get the idea. Back in London a nasty crime scene is discovered, and it soon becomes apparent that the victim of a fire has had his identity pinched (and his skis) so that our villain can join the merrymakers.

Enter Chief Inspector Julian Rivers of Scotland Yard – he features in other Carol Carnac mysteries – who’s a likeable and astute leading detective with none of the bad habits of some of the more recent examples of his genre. He leads the investigation in London while the skiing party get to know each other on a train journey across Europe to the slopes of Lech am Arlberg in Austria. Inspector Rivers is also an expert skier, which is just as well as he eventually has to make the same trip to apprehend the criminal before that person can ski their way to freedom.

The main problem with this story is that there are just too many suspects – 16 in all. And although the author gradually directs attention to three people in particular, I found that I was constantly referring back to one of the – frequent – pages where she lists the members of the skiing party with their distinguishing features. And although Carnac throws in a number of red herrings, they were nowhere near fishy enough for me so that when the interloper was finally revealed their identity came as no great surprise. But all the characters were 'good sorts' and no individual really displayed the dark side that would make them capable of a ghastly murder.

I really enjoyed the atmospheric Alpine setting. The village itself, the ski slopes and surrounding farms were vividly described. Carnac dedicates the book to 'our party at Lech am Arlberg, January 1951' where she went on a very similar jaunt (but without a murderer) of eight men and eight women which inspired this book. It's an undemanding read but an enjoyable one, especially if you like your mysteries to be slightly old-fashioned and with added snow!