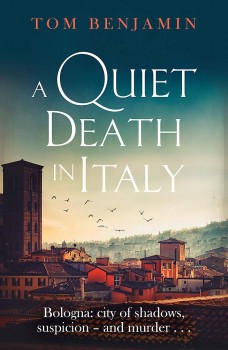 A Quiet Death in Italy

The body of an elderly man is found in one of the canals beneath Bologna. Daniel Leicester, an Englishman who works in Bologna as a PI, sets out to investigate with his boss, the Commandante, who happens to be his father-in-law.

The body of an elderly man is found caught up in a fence in the system of underground canals beneath Bologna. It is recovered and identified as that of Paolo Solitudine who had disappeared two weeks previously, during a raid by police, from the place where the local anarchists were living. He had been a leader of the anarchist factions in Bologna’s local political scene.

On discovery of the body, Marta Finzi, the wife of Bologna’s mayor, contacts her old friend the Commandante, a retired carabiniere and now a private investigator, and asks him to investigate the death. She confesses to him and to his assistant, Daniel Leicester, that she and Paolo were lovers. She is worried that her husband might have been involved in the death.

Her husband, Carlo Manzi, is mayor of Bologna and is in the middle of running for a second term. He promises to bring Bologna up to date by developing the city in a way that should attract a greater proportion of Italy’s tourists, whilst continuing to preserve the ancient buildings, such as hotels. Naturally the anarchists, who are squatting in one such building, oppose his plans.

On first reading, it was difficult to get a clear picture of the plot. This may have been due to the way in which much of the information comes through dialogue. The dialogue itself seems clear and very authentic, but it masks the information that is needed to understand the plot.

In some places it is the speed of the storytelling that causes the difficulty. For example, when Daniel is exploring the canals underneath Bologna, the words in the description almost fall over one another. Trying to build a picture through the words works very well in places but then suddenly, such as at the point at which two tunnels merge, the picture is lost. It was a moment of confusion with bright lights and people bumping into each other. But it’s still necessary to maintain an overall picture of the landscape as, after the confusion, the journey through the canals continues. This scene, had it been described over a couple of pages, might have worked better than trying to fit it into just a few sentences.

The plot is certainly very clever, interweaving the past history of the older characters in the story into the modern events. Much of the past story is written in italics but even this story is not told directly, but with an element of mystery about it that has to be deciphered. Once again, with a second reading of the book, it is possible to tease all this out and to see the intricate parallels that are being drawn between old and modern. Of course, the old/modern parallel of the characters in the story could be a metaphor for how Bologna itself is changing now.

It is gratifying to see that all the characters are given some degree of depth in their first introduction, but this means that it is not easy to sort the major characters from the minor ones. For example, Luca Monza is introduced in depth but only has a couple of very small roles to play in the whole book. Mario Cento, on the other hand, has much less of an introduction, once that can almost be overlooked, but then goes on to be a significant player in the story.

Overall, the book has much to commend it, but it might need two readings to understand the story. There are many lovely descriptions of the city of Bologna, a joy for any traveller who might have visited, or would like to visit, the city.