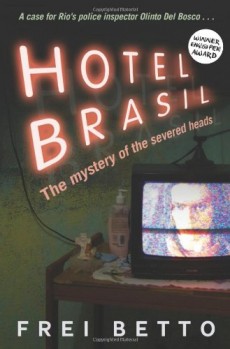 The disparate residents of a Rio de Janeiro hotel all come under suspicion when one of their number is found decapitated.

Hotel Brasil is the first crime novel by Frei Betto, otherwise well known in Brazil as a writer and activist on political issues. The featured crime is the macabre murder and decapitation of a hotel resident, and the subsequent investigation by police Inspector Olinto Del Bosco. However, the book is less about the crime than it is about the nature of Rio society, explored through the characters at the hotel and those with whom they interact.

The most sympathetic of these is Candido, a writer who lives off sporadic commissions from a small publisher and who in the course of the book falls in love with Monica, an academic working on a common editorial project. Candido also takes an interest in street children and in particular Bia, who is targeted by an unofficial police death squad after she heads a mass escape of minors from custody. The desperate life of such children, and the horror of the slums from which they come, are described in distressing detail.

The role of the criminal justice system in respect of such children, and in much else, is almost wholly negative. A senior judicial figure pays off an informer from a slush fund, helping himself to a substantial mark-up. The apprehension of thieves is no more than an opportunity for a shake-down by the arresting officers. Del Bosco’s efforts to solve the murder are motivated primarily by the threat of demotion, and consist of nothing more than browbeating each of the hotel residents in turn. When this fails to achieve a result, he extracts a confession by torture, the victim being saved from incarceration only when a second murder with the same characteristics as the first shows him to be innocent.

Del Bosco’s interviews, which punctuate the early chapters, do, however, give the author the opportunity to explore the lives of the variety of characters washed up in the hotel. These include Madame Larencia, a retired whore and procuress, raped on her 15th birthday by her father, and Diamonte Negro, a transvestite familiar with the wide range of sexual exhibitionists found locally. With the possible exception of Candido, the lives depicted are generally unfulfilled, typified by the maid Rosaura who dreams of featuring in television soaps.

It is of course a characteristic of crime novels generally that the spotlight brought to bear illuminates the individuals affected, and shows certain facets of life in sharp relief. Betto works with such dramatic material that Hotel Brasil is compelling. As far as the ghoulish crimes are concerned, the perpetrator is finally revealed to the reader, but the killer’s motivation remains obscure. The uncertainty seems somehow emblematic of Rio life.