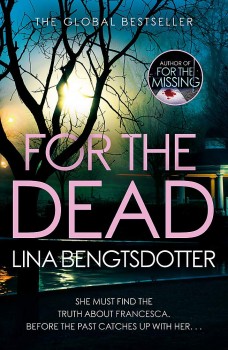 Thirty years ago, teenager Paul was found drowned in a lake, and his best friend Francesca vanished from home. His death was considered a suicide. Francesca was never found. When journalist Johan Ro writes about the cold case, DI Charlie Lager gets pulled into the story.

Lina Bengtsdotter’s For the Dead, in Agnes Broomé’s translation, follows the emotional aftermath of events from the first novel For the Missing featuring Detective Inspector Charlie Lager. While working on another case and fearing personal burnout Charlie becomes fascinated by an old case after reading about it in a newspaper.
Teenager Paul Bergman was found drowned in Gullspång’s lake in October 1989, and his best friend Francesca Mild vanished from her home in Gudhammar soon after. They were both students at Adamsberg Boarding School, and both felt like outsiders. Super-intelligent Paul, a local boy was bullied by others, mostly rich arrogant students. Francesca, a boarder from Stockholm, felt trapped by her family’s standards and expectations, and was convinced that Henrik, her sister’s boyfriend had actually drowned Paul.
Yet his death was ruled a suicide, Francesca was never found, and nobody talked about the events from 30 years ago. Until journalist Johan Ro decides to find out what had happened to the girl from a wealthy family.
Bengtsdotter creates a truly atmospheric and unsettling story told from two perspectives as the main heroines are trying to make sense of own lives: Francesca in the past and Charlie in the present. The time gap pulls them into an unhappy place where truth is hidden under many layers of secrets. Different outlooks complement each other and add depth and drama both to the story linked through people and place, and to their personalities which have developed in fairly difficult circumstances.
They also provide a backdrop to understanding the small-town mentality of community with bleak prospects, the legacy of unemployment, poverty, and constant struggle of unsatisfactory existence.
Charlie is fully formed and complex: an independent woman, brilliant cop, drinking too much to block many difficult memories. You don’t need to read the previous book, although I would absolutely recommend it. However, it will certainly help to appreciate why she wants and needs to avoid the town of Gullspång, where she has spent her childhood and then couldn’t wait to escape from after the death of her unstable alcoholic mother.
Charlie finds herself again in a place that causes her psychological turmoil, and realises that not everyone at Gullspång is happy about her and Johan trying to dig up the past. The process of drawing out bits of information from the local people who might remember something turn out to be painful for several reasons, and one of them is the fact that Charlie has forgotten many things from her past. Others become the key events that have shaped her life, even if the newly acquired knowledge makes her doubt her own memories, fear strange dreams of an imposing house, and confront ghosts following her from pitiful childhood.
For the Dead becomes quite a poignant journey, full of unexpected twists and hard truths from the past. As Bengtsdotter leads her main characters towards the final shocking conclusion, she does it with sensitivity and insight into the long-lasting effects of neglect or lack of understanding. Precision in plotting and flowing narration will keep you gripped by the powerful yet ultimately incredibly sad story.