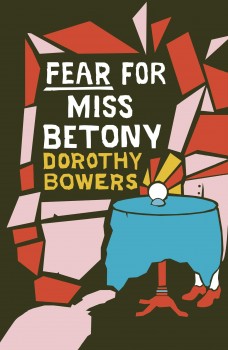 Former governess Emma Betony is asked to sort out a series of strange happenings at a friend’s struggling girls’ school.

This under-rated author, who produced just five crime thrillers before her death from tuberculosis in 1948 at the age of just 46, was both an ingenious and intelligent writer. Despite her short life, Dorothy Bowers was successful enough to become a member of the Detection Club, formed in 1930 by a number of Golden Age mystery writers.

She was seen as a possible successor to Dorothy L Sayers, but was never strong physically and despite being one of the earliest female Oxford graduates, had to support her writing with a teaching job and compiling crossword puzzles.

While her first book Postscript to Poison was a critical and sales success, she never really reached her full potential. This fourth story, first published in 1941, is considered her best and marks the final appearance of her detective Chief Inspector Dan Pardoe.

But it is the former governess, 61-year-old Emma Betony, far more intelligent and a great deal tougher than she likes to appear, who takes centre stage and must conquer several different types of fear to solve a complicated and enthralling case.

Despite being a daughter of ‘trade’– such distinctions were still applied in the 1940s – Miss Betony is considering spending her remaining years in a home for ‘decayed gentlewomen’ when she receives an appeal for help from Grace Aram, one of her former students with whom she has been intermittently in contact.

The abrasive and often defensive Aram runs Makeways, a struggling boarding school for girls that has been evacuated to a former nursing home in Dorset. She does not want to employ Miss Betony’s teaching skills, but seeks a trusted friend to help sort out a string of strange events – including the possible poisoning of one of the home’s two remaining patients. Miss Betony plunges into an atmosphere of unhappy and oppressive unease and a sense of fear which seems to affect both staff and pupils – together with a strange link to a charismatic fortune-teller and satanist, the Great Ambrosio.

This clever story, which hardly follows any of the usual formulae, cannot be rushed. There is a passion and a personal quality about it plus some acutely observed atmospheric descriptions.

The background picture of a failing boarding school, gentlewomen fallen on hard times, over-stretched doctors and even rural train services is brilliantly done. And there is so much more empathy to Bower’s main and lesser characters than in, say, stories by Christie or many other Golden Age writers. Her attention to detail, mastery of real-life macabre and brilliant descriptions of the feminine environment and personalities lead to some quite long but intelligently-written descriptive passages, which some readers may think slow the action.

At times, it can all be a little confusing and it has to be said that the denouement is long-winded but it’s worth going back to get the real value from a remarkable novel. Bowers was a champion of fair play detection – scattering clues liberally through the story – and it’s not that difficult for experienced followers of genre to work out what is hardly a cheerful plot. But persevere. This almost one-off story will keep you reading right to the end.