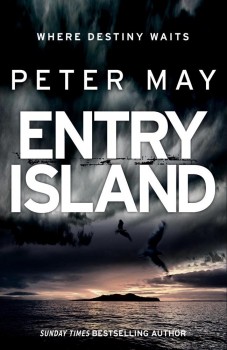 A murder is committed on a remote island off the Canadian mainland – and appears to be linked to events in Scotland over a century earlier.

Entry Island, 850 miles off the Canadian mainland, and a frenzied murder has been committed. The victim’s wife is covered in his blood and it appears to be an open and shut case. That would suit the team leader, Lieutenant Crozes, and his team flown in from Montreal, but Detective Sime (pronounced sheem) Mackenzie is not so sure. The chief suspect, Kirsty Cowell, seems familiar and is very interested in his family signet ring. Is she messing with his head or is it the break- up of his marriage pushing him to the edge? As storms lash the islands Sime slips further into the darkness of insomnia until he reaches breaking point.

The isolation of the islands reflects Sime’s increasing isolation from those around him and contrasts starkly with the portrayal of two tight-knit communities dependent on each other to survive hostile conditions. Previous books by Peter May (Enzo Files) have made me yearn for long, summer evenings in France. By contrast the Magdalen Islands in autumn do not appeal as an ideal holiday destination, but they are drawn with equal care and the atmospheric detail is gripping. Sadly, the descriptions of storm-lashed days and nights are all too familiar to anyone used to the UK weather.

May’s books frequently begin with a prologue which only makes complete sense when you reach the end. This time the prologue introduces a second storyline set 150 years before the main action. This extra story felt quite intrusive to begin with, and the end was certainly predictable, but as the novel progressed, this account of the Highland Clearances was almost more compelling than that of the main plot. A line in the acknowledgements made me wonder if indeed the whole book was designed around this second story line. It may well explain why I found this thread more reminiscent of May’s previous work.

Having said this, the insight into Canadian police procedure made a refreshing change from the more familiar American scenarios, and on the whole I found it a thoroughly engrossing and satisfying read.