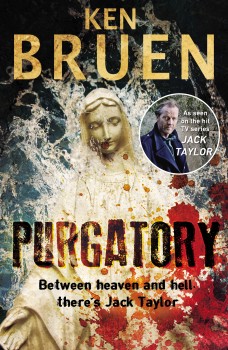 A mysterious vigilante is ridding Galway's streets of human vermin – and wants reluctant PI Jack Taylor to join him.

OK, where to start … If you haven't read any of the previous nine Jack Taylor books, then there's nothing for you to see here. Read in isolation, Purgatory will make no sense whatsoever without the back catalogue. Be brave and grit your teeth – it'll be worth it in the end.

Ken Bruen's series featuring the reluctant Galway private investigator is the noirest of the noir. At times, the spareness of the writing verges on graphic novel style. Come to think of it, Jack's bleak adventures are screaming out for a talented artist to turn them into a comic book.

Not that there's anything in the least comic (in the other sense) about the breath-taking Purgatory and its predecessors. Jack is alive – just – but most definitely scarred mentally and physically. And Bruen has more for him to endure.

Someone – the mysterious C33 – has decided that it's time to rid Galway's streets of human vermin. And he wants Jack to join him. A drug dealer, a rapist and a loan shark are terminated with extreme prejudice. Jack doesn't want to get involved, but he ends up with no choice when his two close (and only) friends Ridge and Stewart are put in danger.

And meanwhile, Jack can't work out why Reardon, an enigmatic American millionaire who wants to buy up most of Galway, seems so keen to have him on his side. Jack is also drawn into a strange relationship with Kelly, Reardon's PR woman.

Bruen's books are among the most spare and spartan in the genre, where the reader's own imagination is allowed to run riot so that Jack's demons and devils become even more terrifying. Added to the mix is truly black humour, snatches from song lyrics and books, and incidents that have jumped from the front pages of Ireland's newspapers.

In many ways, the plots in these books are secondary as Jack, a man who has long since deserted the Catholic church, is a mix of penitent and avenging angel. The end of Purgatory shows that there is more suffering for him to come.