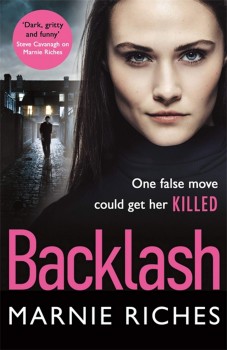 Bev Saunders wants to be a private investigator and has started to take on cases. She sets out to go undercover as a cleaner for a colourful local man of doubtful reputation

Bev Saunders has set out to become a fully-qualified private investigator. Despite her current lack of qualifications, she has begun to take on cases with her friend Doc who acts, in a way, as her business and technical adviser. Bev is hoping to get custody of her 11-year-old daughter who often comes to stay, so needs all the money she can earn.

Her latest case looks initially like a dispute between neighbours. Anthony Anthony, aka ‘2Tone’, is ostensibly a local landscaper and fundraiser who throws lavish fundraising parties in his house. The neighbours tell Bev they are thoroughly fed up with the noise. They want to prove how their lives are being ruined and they want to make 2Tone stop.  However, they don’t want to initiate a formal neighbours dispute which might affect any future resale value of their house. Meanwhile, 2Tone has accused them of harassment.

The neighbours have come to Bev to ask for her help. By chance 2Tone is advertising for a cleaner who can also help with the parties. Bev sees this as a golden opportunity to find out exactly what is going on and proceeds to go undercover as a potential cleaner called Gail. Meanwhile Mihal, a Romanian immigrant, is about to be released from jail in Wandsworth, London, and is planning to go back up north to try to find his brother.

The main adjective that describes this book is fun. The prose races along with the characters constantly on the go. The plot is relatively simple yet has a number of surprises and changes of direction. Bev as Gail, the cleaner, gets caught up with 2Tone’s brother and other shady characters and after various nasty experiences, including a murder or two, discovers what really is going on.

Despite the humour, the plot feels relatively realistic for much of the time and follows a fairly traditional trajectory. Although it has to be said that one or two episodes towards the end do challenge the bounds of belief, but it all makes sense within the context of the story as a whole. The up-to-date issue of modern slavery is addressed through the personal experiences of the characters and is woven effectively into the struggles that Bev has in getting to the heart of the neighbours’ problem.

There is much depth in the characters of both Bev and Doc. With Bev in particular a picture is drawn of the side of her that is struggling with her ex-husband and her heartfelt desire to make a suitable home for her daughter. Inevitably with the rather chaotic nature of her work, she sometimes falls short of her intentions. Her disappointment is palpable, and yet she always bounces back with another way of moving forward. The fact that she is always prepared to take a risk and has such an optimistic view of life makes her a very loveable character.

Doc, on the other hand, starts the story feeling and sounding like a rather negative character but his true motives soon shine through and his true character begins to show itself.  Both characters have a vulnerability that contributes to the constant sense of fragility and danger that makes the book so enjoyable.