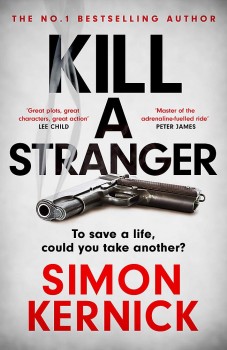 Matt comes home from a night out with friends to find his girlfriend missing and a dead woman’s body in their bed. The nightmare gets worse when he’s told that Kate will die if he involves the police. To get Kate back, Matt has to do the unthinkable. He has to kill a stranger.

DCI Cameron Doyle has a problem on his hands. Two people are dead and there are several suspects, all claiming their innocence. He thinks they’re all lying and as their stories unfold, that suspicion only becomes more deeply rooted.

Matt claims that he came home after meeting friends in London for the evening to find his girlfriend missing and a dead woman he’d never met before dead in their bed. He then claims to have been blackmailed into disposing of her body by threats to his missing girlfriend and their unborn child. But the threats don’t end there. The kidnapper wants him to take a life to save a life and kill someone he’s never met. The question Matt must face is how far he’s prepared to go to save the woman he loves.

Simon Kernick’s stock in trade is fast-paced thrillers that often throw ordinary people into extraordinary circumstances where they have to sink or swim in often very turbulent waters, and Kill a Stranger is no exception to that rule. Kernick also specialises in chucking unreliable narrators into the mix, and after a while that starts to become somewhat predictable. He gets around that to an extent here by clearly signposting the fact that it’s unwise to take any of the characters at face value, so he can indulge his favoured plot device to his heart’s content.

The device does bring its problems, though, as it’s hard to form any sort of emotional connection with characters you distrust from the outset and that creates a degree of distance that can be hard to overcome. I even found it hard to sympathise with Kate, the kidnapped, pregnant girlfriend. She comes over as rather too competent and calculating to be taken at face value, although it takes quite some while for her secrets to surface.

The gradually evolving backstory is suitably complex without being impenetrable and there’s a sharp edge of danger suffusing the story that kept the pages turning quickly in my hands, as I tried to work out what games were being played and by whom. The question could you kill to save a life is one that’s guaranteed to grab my interest, and Kernick knows exactly how to both grab and maintain interest.

It came as no surprise that there are no entirely innocent victims in Kill a Stranger, and at the end of the book, although I’d enjoyed the ride, I felt a little short-changed by the fact that I didn’t care about any of the people in whose company I’d spent several hours. I’d very much like to see Kernick break off his love affair with unreliable narrators and make a return to some of his earlier series characters like hard-as-nails but very likeable ex-soldier Scope, sharp private investigator Tina Boyd and troubled copper Ray Mason.