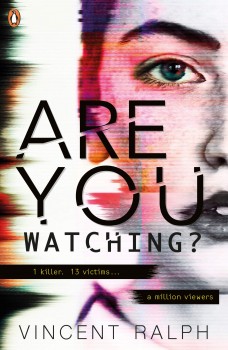 Jess is out to catch a killer. The only problem is that the killer might catch her first.

Seventeen-year-old Jess was only ten when her mother was murdered. That’s not something you just get over, no matter how many well-meaning people tell you that all grief dulls with time.

It hasn’t dulled for Jess. Her grief is still as sharp and raw as it was on the day she first learnt what happened to her mother, which wasn’t at first, because her equally well-meaning father tried to shield her from the truth, telling her that she was so shiny that a magpie took her. Then that morphed, as it would, into the harsh reality of the Magpie Man.

And the Magpie Man hasn’t gone away, he’s kept killing, time and time again. But Jess is determined to bring him to justice, so she decides to tread a potentially dangerous tightrope and become the star of a new YouTube reality TV show, competing against other teens to become the most watched personal story on the channel, as only the person with the most followers will go on to star in their own right for the next few months. All the teens want it. Jess is determined to be the one who gets that airtime. She’s going to use it to snare the Magpie Man. She’s going to bring him to justice.

There’s no shortage of great YA books about at the moment, but even in a crowded market, Are You Watching? would stand out from the rest. The book starts with an absolute gut punch when the reality of what Jess has gone through becomes clear, and author Vincent Ralph absolutely nails that start, and the rest of the book continues in the same raw, fast way, not sparing anyone’s feelings or sensibilities.

And as this is Jess’s story, there’s no reason why she should spare anyone’s feelings when her own have been left in tatters all her life. She’s out to catch a killer. The only problem is that the killer might catch her first.

Jess is fearless, occasionally reckless, but always likeable, as are her friends, and again, it takes a brave author to make their characters likeable at the moment when genre trends, particularly in the adult sphere, seem to be still wedded to the concept of the ever-tortured and irritatingly flawed protagonist. I liked Jess, I liked her teachers, but the story was riddled with the fear that one – or more – of them could be unreliable narrators or unreliable witnesses, so there’s nothing predictable here. I even found the title unsettling. More people are afraid of single magpies that they ever let on. Hands up who recites the magpie charm every time you see a single one?

The central concept is so close to reality that it’s hard to imagine that someone hasn’t already commissioned a reality show on exactly these lines. I have a horrible feeling that if it did happen, I’d be glued to the screen along with millions of others.