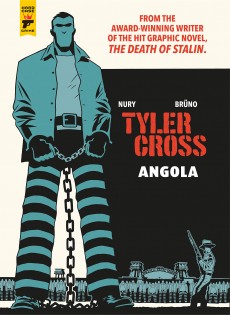 Tough anti-hero Tyler Cross accepts a job in the ultimate profit-making prison, Angola. His chances of getting out again don’t look good, but Tyler doesn’t give up easily.

Angola is a tough, high-security prison set in the sweltering swamps of Louisiana. There’s no intention of rehabilitating criminals in Angola, they’re just there to be exploited to generate a profit for the prison’s investors. Angola isn’t a public service, it’s a money-making business, where the only prisoner who lives in anything remotely resembling comfort is the crooked accountant who murdered both his wife and his lover. His job is to ensure that the books are cooked.

Tyler needs money, and when he’s asked to do a job inside Angola, he accepts – after all, he’s the sort of square-jawed American anti-hero who’s capable of getting himself out of even the toughest situation …

The second graphic novel starring Tyler Cross is dark, violent and at times a tad confusing where the plot is concerned – a bit like one of those gritty French crime dramas lit by no more than a 40-watt lightbulb. The colouring is dark and moody for the prison sequences, segueing into browns and oranges for the sequences in the baking hot sun and some very vivid oranges and blues as night falls in the forests and swamps.

Tyler looks much as I remember Desperate Dan from The Dandy comics of my childhood, but without the beer belly and hat and, if anything, his jaw is even more square. He’s also a damn sight more competent. Nothing seems to faze him and he takes being stripped, threatened, flogged and chucked in a pit entirely in his stride. He meets violence with even more violence, but he’s not entirely devoid of morals, and that’s what makes him the sort of character I could root for.

The other characters are all equally well drawn, from the hapless but likeable Billy who’s being worked to death in the bedroom by the prison governor’s equally unscrupulous wife, and the collection of Sicilian mafia villains who have prison life sewn up just the way they like it. Tyler is tough, smart and determined and Fabien Nury throws in enough twists and turns to prevent the story from being predictable. That, coupled with the evocative colouring, make this a darkly entertaining read and left me wanting to track down the other two graphic novels in the series.