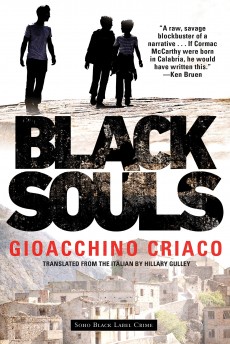 Three boys born into poverty in southern Italy stay together as they grow up and eventually make a lot of money in the big cities in the north of the country. But it comes at a cost.

To approach this novel as a piece of crime fiction would be a mistake. Any reader would be advised to read the editor’s notes at the back of the book before embarking on the story.  The context, of people removed from their traditional homes in remote mountains in Calabria, a region in southern Italy, back in 1951, and their subsequent struggle to readjust to city life, is really fascinating and, in many ways, heart-rending. It might be better to categorise this novel as a historical novel rather than as crime fiction.

Three boys grow up in a remote mountain village where the daily farming life is a struggle, but a satisfying one. The work is instinctive, life carrying on as it has done for centuries, responding to the natural cycles of the weather in the mountains. Traditions feature strongly in such an Italian community and occasionally the farmers are required by the Ndrangheta, the local Mafia, to keep a hostage hidden. So the boys grow up with close links to criminal ways of life.

When they are relocated by the state to live nearer to the coast the families retain links with their old rural life, sometimes going back to spend time with their animals on the mountains or to sleep under the stars. Superficially the boys do well at school and move on to university. But throughout this time, they are heavily involved in crime in one form or another.  Towards the end of their time at school they began to engage in more serious criminal activity and, following their school graduation party, they move to Milan with a criminal friend.  There, they enrol in the university and subsequently begin to get involved in the sourcing and distribution of drugs.

The story is narrated by one of the boys who also comments on the continuous struggle of conscience that he has, and on the constant way in which the old life and its values impinge on his thinking and his actions. Regular holidays back with his family make him aware of the way in which his current life is regarded by his father, who now goes back to his old values, those that he had prior to any work he may have done for the Ndrangheta, hiding hostages, in the past.

The timeline of the book is hard to follow as the main storyline is peppered with tales from the past told by the older generation. It also contains a lot of historical information about the traditional values prevalent in rural mountain life of Calabria.  Also, rather confusing is the frequent use of Italian words in the early chapters used to describe various traditions and roles within the Ndrangheta.  Although these words are carefully explained when they are first introduced, it would have been helpful if there had been a glossary to use when they cropped up again further on in the text.

The difficulties in making sense of the written text may have a number of contributing factors: the interruptions to the actual storyline; the use of instantly forgettable Italian words; different traditions in English and in Italian such as graduation from school in Italy but university in the UK; difficulties in the translation, such as the use of words with the correct sound but wrong spelling, such as check and cheque; slightly wrong English sayings, such as ”a bit worse for the wear” as well as various grammatical problems which might relate to differences in English and Italian grammar.

However, once the context is understood, and allowance given to any translation difficulties, this book has the makings of a fascinating and informative read.