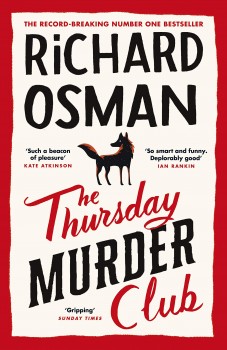 The Thursday Murder Club meet once a week in the Jigsaw Room at Coopers Chase luxury retirement village to keep their brain cells working by 'solving' cases from long ago. But when the members witness real life murder, they employ all the tricks of their former trades in the race to solve a series of killings.

This is Richard Osman's first (and in his words best) novel with a second to follow imminently. I have noted a few popular mysteries recently which feature old people's homes and this one is firmly set in Coopers Chase. Who knew that they were such exciting and desirable places to live with such feisty residents – I would love to end my days at Coopers Chase after reading this (but preferable not violently!)

Richard Osman is a very witty writer who manages to reference 21st century culture through the eyes of a bunch of almost octogenarians without once making me cringe. These are very smart elderly folk who once held top-notch jobs. They may have creaky joints, but they have abundant wisdom and experience and they aren't afraid to break the rules. They are the members of the Thursday Murder Club: Elizabeth, ex MI5? – we never really know; Ibrahim, psychiatrist to the rich and famous; 'Red' Ron, ex-trade union supremo, and Joyce, ex-nurse and diary keeper for the group.

Together with two mates in the police force – PC Donna de Freitas and Detective Chief Inspector Chris Hudson - they investigate two murders and the appearance of some mysterious bones. Mix in a dubious priest, nuns, a thick-set Polish handyman, a washed-up celebrity boxer and various Turkish-Cypriot gangsters, then place them all in an upmarket retirement village, with a contemporary bistro which shares its site with a deserted convent and an ancient graveyard. This is not realism, but it's very good fun …

Rich and seedy Kent businessman Ian Ventham, is the owner of Cooper's Chase, billed as Britain's first luxury retirement village. Ian has grandiose expansion plans which would entail the redevelopment of the abandoned convent and the removal of bones from the Garden of Eternal Rest. He knows that he is dicing with death when he sacks his regular builder plus his associates from the local criminal underworld in favour of Eastern European labour.

The action centres on the proposed excavation and is a call to arms for the residents of Coopers Chase, the members of The Thursday Murder Club and the various interested parties who have secrets to be revealed by the bulldozers.

One murder is swiftly followed by another and Elizabeth, Ibrahim, Ron and Joyce are on the front row. They make their minds up to join forces with the Law in the shape of hapless DCI Chris and his smarter, but junior colleague Donna. But who is helping who? And who is in charge – Chris or the all-knowing, enigmatic Elizabeth who seems to have a contact in every high place and the ability to 'fix' anything.

This is a richly plotted story and all the loose ends are tied up very cleverly and no stone is left unturned. This entertained me so much I can't wait for the second outing of The Thursday Murder Club. Long may the members keep their marbles and their irrepressible appetite for adventure.