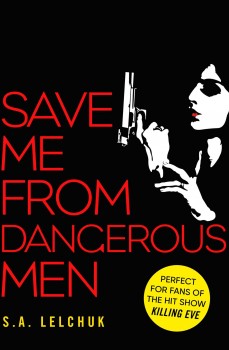 Save Me From Dangerous Men

Private investigator Nikki Griffin takes an apparently run-of-the mill case involving tech secrets, which snowballs into murder, involvement with the FBI, and a team of hitmen.

An extendable metal baton, knuckledusters, a leather-coated cosh, a pepper spray – and a .32 Derringer! These are hardly the average things a woman takes out with her. They’re difficult to fit in a clutch bag or conceal about your person when you have a face and figure that men like to fantasise over! But Oakland, California, bookstore owner and private investigator Nikki Griffin isn’t your average woman. And she’s got more problems than just how to conceal her personal armoury.

A heart-breaking personal history, her parents murdered and her brother a druggie has made her what she is – a kick-ass heroine for America’s ‘Me Too’ generation. Her earlier trauma has left Nikki psychologically disturbed with an overdeveloped protective streak and vigilante tendencies that lead her to mete out her own justice to the partners of abused women – a trait for which she must undergo court-ordered counselling. How she has managed to keep her PI licence is never explained.

In the safety of her office above her second-hand bookstore’s shelves and stacks – a safety guaranteed by a Remington pump shotgun and a Beretta semi-automatic – she luxuriates in her books and the comfort they provide. Motorbike-riding Nicky – nothing simple, just a top of the range Italian superbike – takes a run-of-the-mill industrial espionage job from the CEO of a surveillance baby monitor company, one of the many tech firms proliferating in California’s Silicon Valley.

When the trail turns ugly and the girl’s life is threatened, Nikki is forced to break her cover and intervene. Then the girl is murdered before she can explain what is going on – and Nikki is no longer solving a case. She’s trying to stay alive.

Despite a first-person narrative which lends itself to a ‘ticking clock’ structure, there are just too many gaps in the story for me. When Nikki finds out what is motivating the killings, the reader is left in limbo for pages of dialogue before they too discover what is going on.

There is also too much plain padding. The old trick ‘meet me tonight and I’ll tell you everything’ just doesn’t work in ramping up the tension – and a whole chapter expended on a change of motorcycle to allow her to continue her tailing adds little to the story. And as for swapping literary quotes with all and sundry, do me a favour, this is America, not Notting Hill!

This debut to a promised series has non-stop action, plenty of blood and a Hollywood-style, American dream, vigilante heroine. She’s just too unbelievable for me, though, despite her romantic relationship with a shy Berkeley English graduate. This is one where you’ll need to make up your own mind!