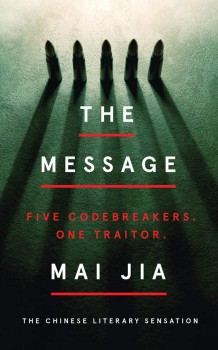 Crucial information is leaked from a wartime intelligence unit. There follows a battle of wits between ‘Ghost’, who leaked the intelligence, and the man sent to uncover Ghost’s true identity.

In 1941 China was at war with the Japanese but the resistance was split between the nationalists under Chiang Kai-shek and Mao’s communists, who never missed a chance to undermine each other. The city of Hangzhou was within the area controlled by a puppet government created by the Japanese, staffed largely by Chinese collaborators.

Hangzhou West Lake is a feature renowned throughout China for its beauty. One of the major mansions in the vicinity is the Tan Estate, unused after a multiple murder, but occupied suddenly by the members of a cryptography unit, assembled there in haste by Hihara, a senior Japanese figure.

Hihara reveals that a message has been intercepted, warning that a planned meeting of a communist cell has been betrayed. He knows that one of five persons in the unit must be responsible and is confident he can trick the agent to reveal him or herself. The agent, code name ‘Ghost’, must try to avoid exposure, but more importantly get a message out warning that important communist cadres will be at risk if the meeting is not called off.

But Hihara’s composure is slowly eroded as he tries one way after another to lead Ghost into an admission, without success. Meanwhile we also hear Ghost’s thoughts, and their worry about being exposed but more so about how to get a message out and prevent the planned meeting. The tension mounts as the deadline for the meeting approaches and Hihara authorises increasing violence to achieve his goal.

In a second part of the book, the author acknowledges that he has built a web of fiction around the factual bones of the story, and that his draft was criticised by one of those actually there at the time, in her eighties at the time of writing (2007). He visits Taiwan to meet this person, and based on her statements offers a second, somewhat modified, version of events.

The circumstances are unfamiliar to most Western readers but will be well-known in China. This was a time of great turmoil, battles being fought against a militarily stronger invader, with hunger, brutality and heroism on all sides. All combatants had well-developed spy networks to infiltrate their opponents; for the operatives a moment’s inattention earned them a bloody death.

The agent in this case would clearly be under tremendous pressure, as would the others caught in the net, and the emotions of all involved are depicted as being seething even if those involved attempt to keep a steady demeanour.

Compared with a Western story in similar circumstances the intensity feels perhaps a little overdone, although given the stakes one can sympathise. The intensity of the struggle between the antagonists and the subtlety of their contest builds to a gripping conclusion.