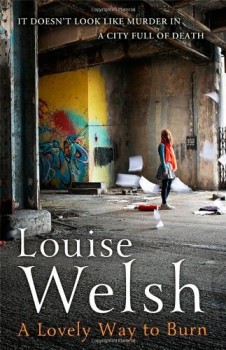 A Lovely Way to Burn

With people dying like flies from a flu-like plague, what does one death matter among thousands? Despite what’s happening in the rest of the country, TV presenter Stevie Flint is determined to find out the truth about her boyfriend’s sudden death.

OK, I admit it, I’m an absolute sucker for any sort of realistically depicted post-apocalyptic scenario or, in this case, a scenario where the apocalypse is all too current. In the 1970s, I was hooked by Terry Nation’s Survivors, and very impressed by Adrian Hodges’ more recent re-imagining. I also leapt with glee on Alex Scarrow’s Last Light books, so in some ways I approached A Lovely Way to Burn with some trepidation, as I’ve expected to like things in the past and been disappointed. But any concerns were soon dispelled.

Louise Welsh delivers an absolute cracker of a crime thriller set against the backdrop of a country in the grip of a frightening plague. Victims are soon laid low with extreme flu-like symptoms, dubbed ‘the sweats’. For most people, death comes pretty quickly, but not for shopping channel TV presenter, Stevie Flint. She pulls through.

With people dying like flies around her in a city fast descending into anarchy, Stevie sets out to discover the truth behind her boyfriend’s sudden and unexplained death. A mysterious package left for her in her loft, combined with the instructions to give it to one particular hospital colleague, sends Stevie on a dangerous quest for the truth while law and order in London collapses.

A Lovely Way to Burn raises the question of why does one death among so many matter any more, and Welsh answers that convincingly, with a picture of a woman holding onto one thing while everything else is ripped from her. Stevie is very much an ‘everywoman’ in this story. She’s got no particular survival skills, apart from the fluke of being a survivor by definition, she’s got no special combat skills or computer knowledge, but she’s tenacious and gutsy and I liked her a lot.

Welsh writes a convincing story of society in meltdown and it’s all too easy to imagine yourself in Stevie’s position as she doesn’t know who to trust or where to turn. The estranged policeman husband of her dead best friend provides some support, but it’s short-lived, as everyone is now. Stevie has to delve into the murky world of drug trials and despairing parents, getting help from a computer hacker en route.

Welsh’s picture of a rapidly-disintegrating society stands comparison of some of the best in this field, including John Wyndham’s timeless classic, The Day of the Triffids, and the fact that A Lovely Way to Burn is the first in a trilogy set in the Plague Times is, for me and other disaster fans, very good news indeed.