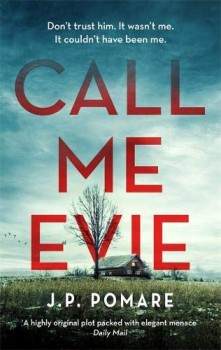 A quiet beach town should be the place where Evie can heal. But Evie isn’t her name, and she is not there of her own free will.

Melbourne. Before. Kate is going through it. She fancies Thom from the first time they meet, but there will be a few false starts and the barrier of Sally to overcome before they finally hook up. Thank goodness she has her best friend, Willow, the face of normality when Kate’s overprotective sports star dad goes too far. But little by little, Kate realises that Willow’s vitriol and manipulations are not reserved for supposed enemies. And Kate’s life is about to go into meltdown.

Maketu. After. Kate arrives at a farmhouse in remote New Zealand. Jim, the man who has brought her to this isolated place, says he is protecting her from the Australian police who are searching for her, and the media who will hound her because of the awful thing she did. Yet Uncle Jim is not Kate’s uncle. Jim is no more his name than Evie is hers. And his behaviour and actions are those of her captor, not her defender. As Evie realises the few people with whom she has contact are whispering in the ears of Uncle Jim, she knows she must escape and get back to Melbourne.

If only she could remember what she had done …

This debut novel confused me. At times, the writing is elegant and atmospheric, but sometimes feels unedited, steeped in tautology and off kilter with the voice of the main point of view character, a 17-year-old girl. The behaviour of each character, even the also-ran locals, is questionable. Rather than – I suppose - the intended amplifying of Evie’s sense of isolation, physical and emotional, it simply makes it difficult to connect with any of the characters. Worse, their behaviour, including Evie and Jim’s, had me rolling my eyes or eyebrow raising on more than one occasion.

Jim’s identity is glaringly obvious, as are the ‘events’ that led to Kate being abducted and removed to New Zealand. If those points are important twists, they fall flat. I could say no New Zealand wool was pulled over my eyes. However, much of the book is ambiguous, fluffy, with many almost otherworldly scenes, particularly in the ‘after’ sections of the book. I’m not sure if it is meant to highlight Kate’s memory loss, but it simply slows the already erratic pacing.

I do not believe the backdrop. This is supposed to be an isolated house on, presumably, the outskirts of an equally isolated seaside town. But the frequent path-crossing with the locals and the vague description often gives the impression the house is anything but remote.

The plot is a thin slice of Swiss cheese, where the holes have been filled with at least 100 pages of wadding. The reveal, after much build-up through half-truths and misdirection, is an anti-climax. I sense potential, but I am not satisfied.