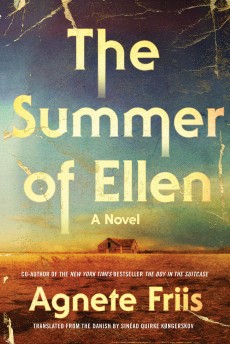 The Summer of Ellen

The realities of modern Copenhagen and of Jutland farmland from the 1970s clash as Jacob Errbo, an architect drinking through his bitter divorce, must return to the area he has not visited for nearly 40 years. His very old great-uncles Anton and Anders want to find out what happened to a beautiful hippy Ellen who moved in with them from a local commune.

Something terrible and not completely explained happened in the summer of 1978 in Jutland when Jacob Errbo was a teenager and helped on a farm belonging to his father’s uncles Anton and Anders.

Jacob’s own dysfunctional family didn’t seem too different from others at the time. A mother who couldn’t wait to get away from home and a constantly drunk father. Hence the hard physical farm work, dirt, strong sweat and animal smells seemed to be a better alternative than being with parents. Jacob’s friends were similar – all eager masculinity, rude jokes and desires.

And then his friend Sten’s older sister disappeared, and people started talking about peeping Toms, and insinuating that Anders might be dangerous. Police and locals searched for Lise in vain. But it was Jacob who found her body in a chicken shed and as a result of unanswered questions Sten decided to take revenge on the only suspect.

Now Jacob is over 50, an architect in Copenhagen, drinking too much and falling apart after his marriage has done exactly the same – mostly because of his own behaviour and the passage of time. In the middle of a bitter divorce he receives a call from his great-uncle Anton, now in his 90s and still living with his brother Anders, who wants to find out what really happened to Ellen all those years ago when she vanished without a trace.

Reluctantly Jacob travels back to the area he hasn’t visited since then and confronts his old friends and rivals. What he finds out will change the perspective of his own memories, especially as he finally discovers who Lise’s killer was. The shocking news will hopefully clear his head but won’t change the painful past.

Not everything in The Summer of Ellen by Agnete Friis, translated by Sinéad Quirke Køngerskov, is as it appears when memories of intense adolescence are buried deep down and forgotten. The novel brings together reflective stories of two eventful hot summers set nearly 40 years apart. This psychological study of young men and their attitudes to women isn’t a classic murder suspense but has plenty of elements which analyse love and violence in the families.

Friis does a brilliant job in the tense narration, evoking bygone times and conflicting lifestyles, clashes between communal living and the ordinary farming community. Her main character is flawed and not totally sympathetic but through his own weaknesses she adds drama and understanding to how these men were functioning, basing actions on instinct rather than logical thinking. This is a book that’s definitely worth reading.