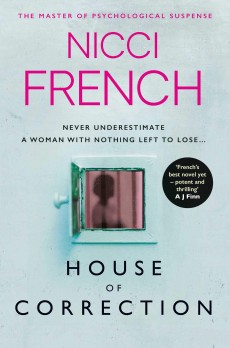 Tabitha Hardy is arrested for the murder of Stuart Rees. She has little recollection of the day he was killed, but is convinced she is innocent, although it seems everyone else believes she is guilty.

Tabitha Hardy is prone to bouts of depression. She finds it difficult to make friends and has a lot of unresolved anger, possibly related to a series of sexual assaults she suffered as a 15-year-old committed by her then teacher Rees. In her 30s she returns to her childhood village of Okeham, where Rees is still resident.

She is having a particularly bad day in December when local man Andy, who is helping her renovate her house, calls and finds Rees’ body in her shed with multiple stab wounds. Tabitha is incoherent when interviewed by the police and she is shortly charged with Rees’ murder.

Tabitha is intelligent but frequently distracted by her mental state and has little memory of the events of the day in question. However, she is convinced she would not have killed someone, and when her appointed defence counsel advises she plead guilty to manslaughter, Tabitha is determined to conduct her own defence.

Her almost total ignorance of court procedure and resentment of authority does her no favours either in prison on remand, or in court. She is spiky and difficult to deal with. However, the prison governor, and the judge in turn, have to make concessions to Tabitha’s situation and she is grudgingly given some licence.

It is easy to admire the skill with which the authors – husband and wife team Sean French and Nicci Gerrard – balance the character of her protagonist. Tabitha‘s situation demands our sympathy but at the same time her hair-trigger temper and unwillingness to make concessions to others can be very irritating. She is at once insightful and dumb, hostile and gentle, and altogether a challenge to those she comes across.

The first half of the book explores Tabitha’s attempts while in prison to find some way of tackling the seemingly impenetrable edifice of the case against her. Despite her difficulties, Tabitha manages to persuade residents of Okeham to visit her in prison and gives exhaustive scrutiny to events of the day, minute by minute, in the absence of any other means of approach to her defence.

She has made little progress, however, when she arrives in court for the second half of the book. It takes focus on fine details as the case progresses which eventually enables her to find threads which expose weaknesses in the Crown’s case. Only in the final pages does she get an inkling as to what really happened on the day Rees was killed.

Her insistence on doing things her own way brings her into conflict with the procedures of the law and highlights the way in which those without legal training can find themselves at sea, which provides a different and engaging approach to courtroom drama. The book is based around a subject who comes across as unusual but wholly convincing, and this makes for a very entertaining read.