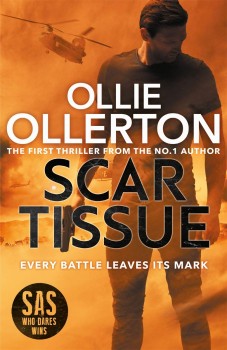 When former special services operative Alex Abbott’s son goes missing, he’s determined to do what he can to help, even if it means walking into a trap.

Alex Abbott is a former Special Forces operative who left private security work in the Middle East under a cloud and is now just about getting by in Singapore, working a series of low-level, low-paying jobs. Abbott’s main problem is that his experience in the military has left him with a serious drink problem that has wrecked his marriage and estranged him from his family.

When Abbott makes a bad mistake on a job for one of his best clients, things get a little hot to handle and when he learns that his son Nathan, also in the army, has gone missing in Baghdad, Abbott is determined to help. It also gets him away from Singapore, before various irate people catch up with him.

Abbott that soon starts to think that his son has been targeted to get revenge on him. The stakes get higher when former close friends he worked with in Iraq start to die. Someone is determined to settle an old score. The problem is that he has no idea who is out to get him or why. And with a return to his old stamping grounds, his problems are only just beginning …

These days you’d be forgiven for thinking that the natural career progression for anyone in special forces is writing, and before turning his hand to fiction Ollie Ollerton, who served in the Royal Marines during Operation Desert Storm in the first Gulf War and then spent six years in the Special Boat Service, has already written two non-fiction books about his own life and career.

On his own admission, there’s a lot of himself in Abbott as a character, including the problem of dependence on alcohol, but the problem with that as the basis for a fictional character, especially a military one, is that there’s nothing original or ground-breaking about fictional alcoholic ex-soldiers now in the private sector, as anyone familiar with Chris Ryan’s John Porter in the Strike Back series will know, and he’s only one example in a crowded field.

I must admit, I found it hard to get on with Abbott as a character. His drinking has turned him from a reliable contractor in a dangerous business into an irritating liability surviving mainly by luck. I certainly wouldn’t have wanted to employ him as a private military contractor on any level. Yes, there were times when his instincts and reactions were still sharp, but the lack of professionalism was what put me off. That, and the fact that I really am just pretty bored by characters whose main selling point seems to be their flaws. It feels overly contrived.

That aside, the action was convincing and the military detail was enough to lend authenticity but not overloaded to the point of a ‘boys’ toys’ manual. The plot was complex without being opaque and the secondary characters were well-handled, with some neatly drawn pen portraits that fleshed out the minor characters and made them matter. At times it was hard to tell the good guys from the bad guys and I found my sympathies cleverly misdirected on a few occasions. The big business world of private military contractors – or mercenaries, as we used to call them – is an interesting one, and the heavy reliance placed on them in places like Iraq will be an eye-opener for a lot of people.

My reservations about Abbott as a main character won’t put me off tuning in when he returns, as he will, as the book was left with a large, baited hook dangling in front of the reader. But if Abbott doesn’t do a better job of laying off the sauce and getting his act together, I can’t guarantee he’ll retain my interest for too long. This was a competent, solid thriller but it’ll take more than that to snatch the laurels from Andy McNab and Chris Ryan.