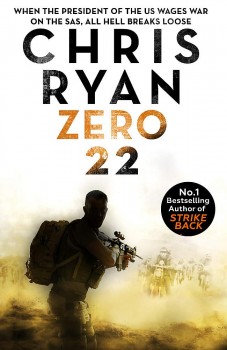 Despite an ambush that leaves Danny Black the only survivor of an SAS unit, it’s not long before he’s deployed again, this time to assist in the assassination of the man ultimately responsible for the attack that left so many of his teammates dead.

Danny Black is on an SAS operation in war-ravaged northern Syria when his unit, Zero 22, is compromised, caught in an ambush and ruthlessly cut down by a group of highly trained mercenaries, led by a man dressed as a Hell’s Angel. Danny will know the man if he ever sees him again, although the chances of that seem slight as he’s whisked off back to the UK to be debriefed after the disastrous op.

An unexpected opportunity arises when Danny is asked to take part in a covert, wholly deniable operation to assassinate the man ultimately responsible for the deaths of his teammates. Danny doesn’t hesitate, even though the task is little more than extra-judicial murder. What does disturb him is the identity of the person chosen to be his partner on the high-risk mission: former MI6 agent, Bethany White, who turned rogue and killed several SAS men in an act of calculated revenge. The only reason she’d evaded justice was the fact that she had lodged evidence of British war crimes with various lawyers around the world and in return for her silence she was allowed to go free.

But now MI6 have need of her particular skill-set -  and stunning looks – to get close to and kill an American general who is believed to be involved with the Russians in a high-level plot against the US president. Danny Black is ordered to ride shotgun on the mission and make sure White reaches her target. Once she’s carried out her task, Danny has one additional duty to perform – he must kill Bethany White.

To ensure her cooperation, MI6 have kidnapped her young son, on the promise that when the general is dead, they’ll be reunited. What neither White nor Danny know is that the boy was accidentally killed during the kidnap.

I always enjoy Chris Ryan’s military thrillers and Zero 22 was no exception. Danny Black is an engaging character. He’s a good guy doing a difficult job. He follows orders – up to a point – but isn’t afraid of going off-piste if the occasion demands. He’s ruthless, but not entirely devoid of principles. His feelings for White are ambivalent. He admires her skills but doesn’t trust her as far as he could throw a nailed-down grand piano. He knows it was only the intervention of her young son that stopped her killing him when they last encountered each other, and he doesn’t entirely trust her not to finish the job.

As ever, although Danny is caught up in events way, way above his paygrade, he survives through a combination of brutal pragmatism and inventive skills. There’s a hard-hitting scene where Danny stages a very impressive ambush to avenge his dead friends which is very definitely not for the faint hearted. If gritty realism isn’t entirely your cup of tea, I’d advise a handy cushion to hide behind on a couple of occasions.

The plot never trips over into something too far-fetched to believe, and the heart-wrenching story of a former Guantanamo Bay suspect and his family grounds the whole story in a reality that at one point was never far from our television screens. I desperately wanted a happy ending for them, but in today’s world, it seems that those are few and far between for anyone.

Ryan is in the top-rank of military thriller writers and shows no signs of slipping down a grade. Nor does Danny Black.