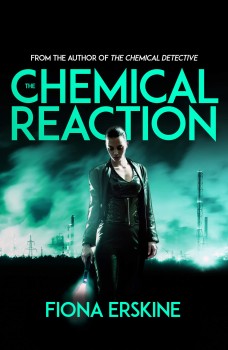 Chemical expert Dr Jaq Silver is in desperate need of some income. She’s got debts mounting up and no easy way of paying them off, so when she gets a job offer that involves a trip to China, beggars can’t be choosers.

Jaq Silver is in serious trouble. She’s on board a yacht in the Black Sea, with a nasty storm brewing. With only one other person to help her crew the vessel, Jaq attempts to outrun the bad weather, but as the wind blows stronger and mountainous waves threaten to overturn them. Jaq’s best efforts aren’t enough, and something breaks, and the yacht flips over, stranding her lover, Giovanni, under the hull in a rapidly diminishing air-pocket. Jaq can only think of one way to free him, but she’s just as likely to kill him in the attempt …

The Chemical Reaction starts with a fine art auction in London, but quickly jumps into Jaq’s struggle for survival in the Black Sea, throwing out a strong hook for anyone not previously acquainted with Fiona Erskine’s protagonist. I felt at something of a disadvantage as Jaq is clearly at the tail end of her previous outing in The Chemical Detective and the earlier book casts a long shadow, with not much by way of backstory, but I decided to stick with it, as I’m always up for getting to know a new, gutsy female main character.

The sinking of the yacht spells trouble for Jaq even when she is able to get her feet back on dry land, as when she borrowed it, she didn’t take much – if any – notice of the contract she signed, which left her solely responsible for reimbursing its owner in the event of damage, and in this case, the damage is pretty terminal. Jaq’s claim that there was some inherent flaw in the craft falls on deaf ears and its owner, the unaptly named Frank Good is determined to extract every ounce of his pound of flesh, leaving Jaq desperate for enough cash to fight his claim. And then on top of that there’s the cost of keeping her mother in a nursing home in Portugal.

Against her better judgment, Jaq accepts a job that takes her to China to do some sniffing around a factory at the heart of a joint venture agreement that’s in danger of falling apart. But in China, she soon discovers that nothing is what it seems. A factory disappears almost without trace, as does an old student of hers that Jaq had been hoping to meet up with.

Jac Silver is a risk taker, she’s also stubborn and that’s a volatile combination, almost as volatile as some of the chemistry that frequently comes to her aid when she’s in a tight spot. I must admit that it took me a while to warm to Jaq but I suspect that was influenced by a slight frustration at not having read the first book which is often a problem with coming into the second book in a series. Too much backstory slows the pace, but too little can make it feel like you’re the third wheel on a date. I was also rather put off by the fairly gratuitous animal cruelty, which is my big squick. I can’t think of any books that are improved by that sort of thing, and this was no exception to that rule.

The Chemical Reaction is a complicated mix of two converging storylines, one concerning stolen Chinese art, and the other about the disappearing factory. It wasn’t clear how these disparate elements were going to come together, but when they did, it all added up to a convincing thriller with an unusual edge.