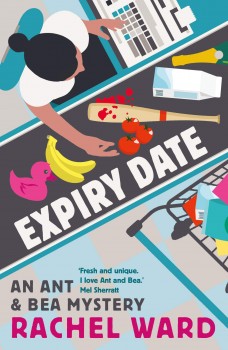 When a woman’s body is discovered during building works, supermarket worker Bea Jordan is worried that it might be one of her customers who she hasn’t seen for a few weeks. But the body has been there longer than that and proves to be connected to Bea in a very unexpected way.

Bea Jordon works on the checkout counter in Costsave, a supermarket in Kingsleigh, a backwater suburb of Bristol where the murder count already looks set to rival the notorious Midsomer! But for me, the crime-busting duo of Bea and her friend Ant are a hell of a lot more believable than the antics of Inspector Barnaby and his various sidekicks. Unlike the idealised locations of probably the most famous murder-ridden county in England, Kingsleigh and its inhabitants come over as very real. Rachel Ward brings the down-to-earth setting of Costsave alive and this makes it very easy to care about her characters and their lives.

Ant is down on his luck as the story opens. His dad, a career burglar, is still in prison and his mum has upped sticks and moved with Ant’s brother and sisters to Cardiff, leaving him sofa-surfing with friends. Currently he’s staying with his mate, the delightfully – and accurately – named Saggy. His friend Bea does her best to look out for him, too. The friendship between Ant and Bea is one of the highlights of Rachel Ward’s writing. They’re both young, Bea only 21, and Ant a year or two younger, and there’s something very touching about the relationship. Ant’s learning to read and Bea’s helping him with his homework, and Ant always has Bea’s back, too.

Bea is worried about Julie, one of her customers. Bea’s sure she’s been on the receiving end of abuse from Dave, her pond-life husband who’s given her black eyes in the past. Bea hasn’t seen Julie and her kids for a few weeks and she’s starting to get worried. Then when work on the building site next to Costsave abruptly stops amidst rumours that a body has been found, Bea is terrified that Julie is dead.

The reality turns out to be even more personal. The body is that of Tina, a young woman who used to babysit for Bea when she was young. It’s not long before Kingsleigh is a hotbed of gossip, centring on Bea, her mother Queenie, and Bea’s dead father.

Bea’s relationship with Queenie is under strain in Expiry Date, with Bea being forced to question the actions of the father she idolised. But Bea is certain her father had nothing to do with Tina’s death and she’s determined to prove it. And when Bea starts to investigate, Ant isn’t far behind. There’s plenty of help from unlikely quarters, notably from former antagonists Dean and Tank and, in other surprising news, Dean is found to have hidden talents when the Costsave choir opens itself up to family and friends!

For my money, Ant and Bea are the most entertaining pair of amateur investigators in crime fiction. They’re fresh, lively and very relatable. They’re ordinary people caught up things they have no control over and are just doing their best. And it’s a very good best indeed. Over the course of three books, they’ve succeeded in getting very firmly entrenched in my affections and I feel I know them far better than I know most other characters in crime fiction at the moment. I care about them and want to know what they’re going to get up to next.