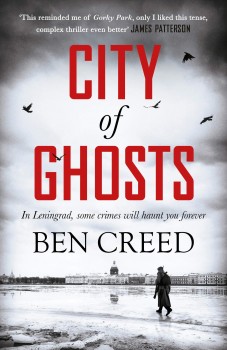 A young Russian militia lieutenant is called to a nightmarish scene of five corpses and finds that the victims have links to his own past.

The particular problems of a militia officer in the USSR have inspired several fictional detectives, of which Martin Cruz Smith’s Arcady Renko is perhaps best known. Action by state organs to ensure some politically expedient outcome was a frequent complication, and arbitrary arrest, torture and imprisonment a recurrent feature of life, particularly under Stalin. Here we have a new detective who has been an unfortunate recipient of state cruelty.

Revol Rossel studied violin at the prestigious Leningrad Conservatory before the war but was arrested for making anti-Soviet jokes. After torture which mangled his hands, and wartime experience in a ‘shock’ battalion he is lucky to be still alive. By 1951 he has been sufficiently ‘rehabilitated’ to be made a junior officer in the militia.

Stalin’s rule of terror has reduced the ranks of the force so that Rossel, his drunken boss Captain Lipukhin and the rest of the team are needed outside their normal patch to examine a newly discovered crime scene. Five bodies have been found, placed in a very particular way, over two adjacent sets of railway tracks. All identification marks have been removed and the bodies show signs of prolonged starvation as well as gross assault.

One of the bodies is in the uniform of the MGB, the secret police, and Rossel fully expects the MGB to take over the case. Until then, he proceeds cautiously with his investigation and is shocked to find he knows the victims, who are all linked to the Conservatory of Music. Eventually the MGB do show up. Rossel is expected to continue his work but knows that if his accusations lead in an unwanted direction he will very quickly end up in the gulag, or worse.

The action is immersed in its time and place: the severity of the Russian winter, recollections of the recent terrible suffering of the city throughout the 900-day wartime period in which it was all but cut off from supplies of food, the continued privations and the all-pervasive fear and confusion whipped up by official propaganda. The sense of a particularly Russian determination to enjoy life despite these difficulties also comes across.

Under such pressures it is unsurprising that many succumb to alcohol or become cynical, but Rossel is remarkably philosophical about the loss of his life as a violinist. He looks back on his time as a student across an immense divide, but as the victims are slowly revealed as being his friends, including a girl he loved, the case comes to have a personal feel.

Eventually the solution seems to emerge from Rossel’s thinking about the Conservatory, without being fully articulated. Lack of official support means he has to proceed alone, leading to some thrilling final pages. The whole makes for a gripping tale set in a convincing historical context.