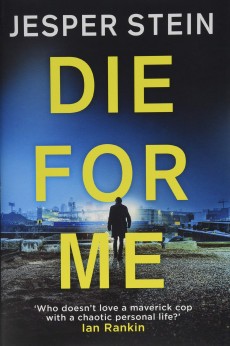 Maverick DI Alex Steen cannot let go of an unsolved case that destroyed his own life four years ago. DNA evidence from recent rapes in Copenhagen links the perpetrator to the killing, and Alex is desperate for one more chance to try to solve the case.

To be perfectly honest, Detective Inspector Alex Steen is a mess, up there with Jo Nesbø’s notorious, extraordinary Harry Hole. Readers of Jesper Stein’s previous novel will know more than enough about his addictions and obsessions, his inability to work in a team, his recklessness and general unsuitability to be a hero.
However, underneath the rough, brutal shell he is a damaged and wounded justice-fighter, desperate for love and to get back with his ex-wife Cecilie and longing to be with his young daughter Emma. Naturally, that kind of insider knowledge does not help in daily interactions because no one has time to dig deep into his emotional wounds.
Alex focuses on smoking dope, self-loathing and his absolute fixation on solving a case that destroyed his life in so various ways. Four years ago, he was unable to catch a ruthless killer and bring a closure to the murder of 18-year-old Marie Schmidt, who was found drowned in a lake in a popular city park. The case has been shelved although many potential witnesses bore the brunt of tough interrogations. One of them was Marie’s father who made a lasting impression on Alex.
When a young woman is brutally raped in her own flat, the forensic team find traces of DNA linking the perpetrator to the man who might have killed Marie. At this point Alex realises that he might have one more shot at finding the killer. He is allowed to conduct some investigations while dealing with his colleagues on a series of brutal rapes carried out by an extremely vicious attacker. More evidence leads to the discovery of further assaults.
Apart from the manhunt for the serial rapist across Copenhagen that’s sweltering in July heat, Alex also has battles on a personal front, trying to find a place for himself within a new work structure. In particular he needs to play nicely with two men: his old friend John Darling, now his superior, and an ambitious new Deputy Commissioner Jens Jessen who entered his life as Cecilie’s new partner. The dynamic between the three of them is very well portrayed, showing genuine power struggles. The clash between on-the-ground policing versus procedures and the law adds intensity and tension to the already strained relationship Alex has with the other detectives.
Jesper Stein does not shy from the brutality of detailed descriptions. The crimes are horrendous, deeply affecting the rape victims and those who come into contact with them, for example the unflinching, brilliant lawyer Ea Holdt, who’s fascinated by Alex. This is a very dark, disturbing world seen through the eyes of distraught women, occasionally disregarded by the police. It reminds me so much of Erik Axl Sund’s Crow Girl and, in the same way, Die for Me (original title Bye Bye Blackbird) is a gripping, addictive and unforgettable read, making a strong point. In addition, Charlotte Barslund’s translation is excellent.