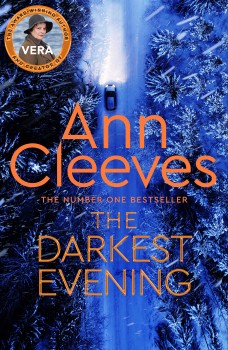 The body of a young woman is discovered in the grounds of the Stanhope estate. The combination of the remote and snow-covered landscape, a close-knit village community and ancient family secrets leads to a classic case of love, revenge and murder.

The Darkest Evening is the latest in the Vera Stanhope series from Ann Cleeves and takes its title from Robert Frost's enigmatic poem Stopping by Woods on a Snowy Evening. This atmospheric story is full of snow, glowering skies, bleak moors and woodlands dotted with remote farmhouses. It won't disappoint Vera fans and certainly didn’t disappoint me.

Of added interest is the fact that the action centres on the Stanhope estate - the family seat where Vera's father, Hector, was an unwelcome guest as the black sheep. Here the remains of Vera's family live out a life of genteel poverty. Although presented to her colleagues as distant relatives they are in fact first cousins.

Vera is lost in the worst blizzard of the winter on her way home to her rackety farmhouse when she comes across a car abandoned in a snowdrift. And strapped into the back seat is a little boy. This leads Vera to the door of Brockburn House and her own kith and kin; her first visit since she was dragged along as child by her father on one of his 'cap in hand' visits. During this visit, while Vera takes tea in the kitchen, the body of a young woman is discovered in the snow-bound grounds.

Vera's faithful team are called out – Joe, Holly, Billy the pathologist – and the investigation begins.  A rich cast of suspects include the tenant farmers of the Stanhope estate, neighbours of the dead girl in the nearby village plus the members of the Stanhope clan at the big house. Even the young woman's own mother and father are of interest in Vera's enquiries. The Robert Frost poem talks about keeping promises and the close-knit community do indeed pull together to keep their secrets from Vera and her team – and this inevitably leads to another death.

But, as usual, although Vera looks like a bag lady, she has the sharpest of minds and she has her suspicions. I had my suspicions from about the halfway mark, but it turned out that they didn't coincide with Vera's, which is good, because I like the denouement to come as a complete surprise.

What I love about the Vera books is that the characters are so well drawn, the writing is nuanced and interviews conducted in farmhouse kitchens convey with the minimum of dialogue a wealth of information. Ann Cleeves is a master of her craft. I am sure that fans forgive her the occasional weakness in the plot. I was unconvinced by the idea of a young mother setting out on the darkest evening of the year, in a borrowed car with her toddler in the back and a blizzard raging.

There is also the added bonus of the developing relationships within the Vera team. Joe is still 'her boy', and he is still locking horns with his wife, Sal, over his boss’ demands. But then there is Detective Sergeant Holly, a complex young woman who resents Vera but is desperate to impress her, feelings which are to some extent reciprocated by Vera. In a very exciting climax to the case Vera is in grave danger and it is Holly (not Joe) who plays a significant role. I am interested to see how this particular pairing develops in future outings – and I hope there will be more. Vera is too great a character to be put out to grass just yet!