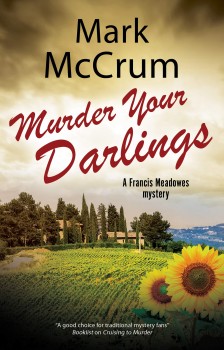 A group of people gather in an Italian villa in Tuscany for a summer writing course. One of them is found dead in the sauna and murder is suspected.

A group of people from the UK, Ireland and the USA gather in a beautiful Italian villa for a summer course on writing autobiographies. The course title is Murder Your Darlings. The tutor, Francis, is a writer himself and turns out to be an expert in amateur investigation.

As is often the case with such courses, the course members are given writing tasks to work on, after which they meet to read the results of their labours with the rest of the group.  The work is punctuated by delicious food and drink, leisurely walks and group trips out to the surrounding countryside. But after the first week, most of the course participants are heartily sick of Poppy, an elderly woman who is constantly name-dropping and talking about her wealthy background.

On the whole people don’t make their dislike obvious, limiting their comments to slightly sarcastic remarks when the opportunity arises. Then early one morning Poppy is found dead in the sauna where she went every day following her solitary swim in the swimming pool. It is inconceivable to think that one of the group members would have done anything, but when the police are called, they say that Poppy was definitely murdered. The rest of the group are interviewed and eventually confined to the villa until the murderer can be discovered.  Meanwhile, the group members discover more about each other.

This is a slow-moving, rather genteel book, the style matching the laid-back atmosphere of life on a typical summer holiday course in an Italian villa. Descriptions of the countryside abound, but at times they appear somewhat stereotypical, rather like a photograph of Tuscany for tourists. Only when Francis falls over on a steep hill does the landscape become real. At that point, the heat and the dust can indeed be felt as Francis tries to stop his headlong slide.

The wonderful food is referred to frequently. Sadly, only on one or two occasions is the actual food identified, and then in no detail, unusual for a novel based in Italy. However, the coffee machine is frequently mentioned as the hub of many group activities and discussions. Halfway through, the writing group is amalgamated with the resident art group for much of the off-lesson time, to provide approximately 14 suspects.

The writing is very fluent and readable, with realistic dialogue matching the characters as far as they can be seen on a superficial level, which is just how participants on such a course might appear if they did not know each other.

Throughout the book there are no clues as to the identity of the killer although at times the thought processes of Francis, the tutor, gives pointers as to what might have been deduced from the slowly emerging personalities and histories of each person in the group.

The characters, in general, are only loosely drawn and thus difficult to focus on. Only when more information becomes available such as the pseudo psychoanalysis of a couple of the guests by a younger one, is it possible to begin to analyse the possible thoughts of each, and their possible motives. There is certainly a logic behind Francis’s on-going analysis, although a second murder puts an end to many theories and only a last-minute revelation enables the mystery to be solved.

Overall, this is an easy book to read but it was a shame that so little effort was required, although Murder Your Darlings does provide plenty of gentle entertainment.