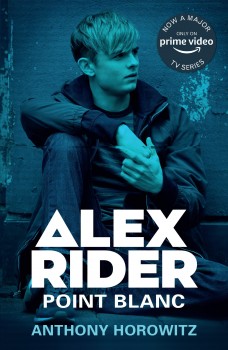 Reluctant teenage spy Alex Rider is sent undercover in an exclusive school for the rebellious offspring of some of the world’s richest people to find out what links two unexplained deaths to Point Blanc academy in the Alps.

In America, billionaire Michael J Roscoe inexplicably falls to his death down a lift shaft in his office block.

In London, 14-year-old Alex Rider exposes a pair of drug dealers who have been operating in his school. Unfortunately for him – and them – his unauthorised use of a high-rise crane didn’t quite go according to plan, and the barge he’d been intending to deposit outside the local police HQ ended up falling through the roof of a new conference centre instead.

With an eye to the main chance, as ever, the Special Operations Division of MI6 blackmail Alex into going undercover in Point Blanc, an exclusive school in the Alps for the errant offspring of the super-rich, the only connection between the two deaths that MI6 have been able to discover. He poses as the rebellious son of a supermarket tycoon, and it’s his job to find out if there’s anything going on that his spymasters need to know about.

Alex quickly becomes suspicious when he discovers that large parts of the academy are out of bounds and that the school is under armed guard. Some of the formerly rebellious teenagers also seem to be strangely compliant, in thrall to the school’s founder and director, Dr Grief, who quickly reveals himself as a firm supporter of apartheid and an admirer of Hitler.

When Alex sees one of Point Blanc’s staff shot dead by Grief, he activates the device that MI6 have given him to signal that he needs to be extracted, but back in London the ruthless Alan Blunt decides to wait 24 hours before pulling Alex out – 24 hours that could well prove fatal for the young spy.

Twenty years after Anthony Horowitz’s Alex Rider series appeared, Amazon have produced a television series based on the exploits of the reluctant teenage spy. Whereas most teenage boys might dream about escaping from school into a life of excitement and adventure, Alex just wants to be left alone to get on with his life after the death of his uncle, but MI6 see the advantages in using a teenager for undercover work and want Alex to follow in his uncle’s footsteps by working for them. The choice of Point Blanc as a starting point for the TV series was a good decision, as the central premise hasn’t aged in the same way as that of Stormbreaker, the book that introduced Alex.

The series neatly captures the essential qualities of the book, delivering up a sassy, sarcastic Alex determined to get to the bottom of his uncle’s death, and equally determined to escape the clutches of the repellent Dr Grief and his associate, the sinister Mrs Stellenbosch. This dramatisation is likely to bring a new generation of fans, both teenagers and adults, into a series that has stood the test of time exceptionally well.

Horowitz excels in bringing shades of grey to what at first sight might seem like standard ‘teen saves the world’ scenarios, and much of the grey surrounds the characters of Alan Blunt and Mrs Jones, who are determined to make use of Alex, despite his age, thrusting him into dangerous situations with only a few gadgets provided by Smithers (Q to Alex’s Bond) and the promise of back-up from an SAS unit. And that back-up takes longer than it should to deploy, due to Blunt’s icy ruthlessness where the life of the young spy is concerned.

Alex is brave, resourceful and very likeable, qualities that both the books and the Amazon series bring out well. The remainder of the series is crying out for the same treatment for the small screen.