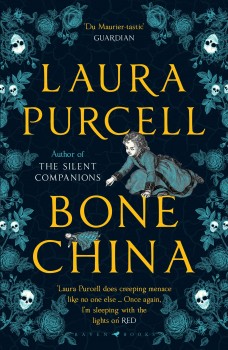 Nurse-companion Hester Why flees London for a position at the lonely Morvoren House on a desolate Cornish clifftop where she finds herself faced with a dark and dangerous situation linked to events of 40 years before.

A rambling isolated house, storm-soaked nights, sinister secrets and hidden agendas …
Laura Purcell is back with another atmospheric and chilling tale to follow her unsettling and richly drawn The Silent Companions and The Corset. Her well-wrought tales are shaded with dark Gothic intrigue, and she has a sure storytelling touch, a superb command of atmosphere and a keen eye for the telling details of social history.
She also manages to keep some suitably macabre final revelations for her cast of mysterious characters, and with a beautifully portrayed sense of foreboding and malevolency lurking around every cover, Bone China is a sinister and chilling read. Following timelines set 40 years apart Purcell weaves a superbly researched tale steeped in Cornish folklore. But somehow it doesn’t really gel.

Purcell, as always, writes beautifully, but her story, despite its atmosphere and underlying tensions, drama and rich history, loses itself in weak protagonists and a messy, convoluted plot. The two distinct storylines fail to interweave effectively, producing a slow pace that at times leaves the reader confused. It also ruins the flow, jerking from one plot to the next and leaving the narrative disjointed.

Nurse-companion Hester Why, one of the protagonists, is either unlucky – or makes her own bad fortune. Usurped and fleeing a position in London, she arrives at the lonely Morvoren House on a desolate Cornish clifftop to discover her situation may actually be worse. In London her troubles were human in nature; in the Cornish wilds she finds herself faced with something much darker and more dangerous.

The misguided and sad Why is also a rather weak character, who seems only to want to be loved and needed. She’s also rather unlikeable – no problem in itself, but there is no explanation for her actions or thoughts and it is difficult to retain interest in what happens to her. The other main protagonist is her new employer, the now partially paralysed and almost entirely mute Miss Louise Pinecroft. And it is her back story which lays the ground for what follows.

Consumption has ravaged her family, leaving her and her father alone and heartbroken. But Dr Ernest Pinecroft is convinced that his plans for a revolutionary treatment utilising sea air will prove a cure for the disease and arranges to house a group of infected prisoners in the cliffs beneath his new home.

This is where the plot comes apart. Not only does the story become predictable it also begins to lose any real connection between the two parts. The flashbacks which explain Miss Pinecroft’s obsession with the china of the title and her refusal to speak are brought to play too late.

Purcell’s usual balance of supernatural and psychological explanations breaks down because there’s not enough of a relationship between the characters for the reader to care either way.

Ultimately, despite a tale saturated in folklore, fear, paranoia and dread, and Why finally finding a way to save one of her charges. this is a little disappointing – and very different from the feeling of dark possibility that closed the excellent The Silent Companions.