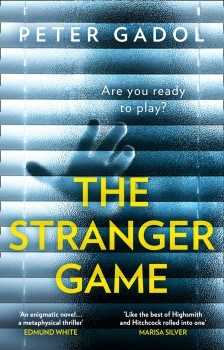 Rebecca’s boyfriend is missing. But she is unsure if he is licking his wounds, or if has he become another victim of an increasingly dangerous game sweeping Los Angeles and beyond.

It's been over two months since Rebecca heard from her ex, Ezra. Even though they're separated, they've never gone this long without speaking. She searches his empty apartment, finding a printout of an article about a man who followed strangers to find some connection with those around him. That, and the landlord saying Ezra is behind with his rent, points to something being terribly wrong.

But when Rebecca reports him missing, the police are not particularly worried. Even less so when they discover he has been playing the stranger game. Partly because she is intrigued, partly to find Ezra, Rebecca begins playing the game, following strangers and abiding, mostly, by the rules laid out online. But the more entrenched she becomes, the more she finds the game has become something more than voyeuristic, and significantly more hands-on dangerous. Worse, there are people playing who aren't interested in the rules at all.

Although the premise of this story shows promise, this is a too-slow-burn book that might be better on the social commentary shelf. It lacks the thrill that would turn it into a thriller. It lacks urgency and immediacy. It lacks the depth and edginess needed to make it the promised literary suspense.  And the characters are barely likeable and wholly implausible.
Rebecca Crane is an architect, but nothing convinces me of her intelligence. Really, she is a bit of a bore who spends most of her time talking about what she and Ezra used to do together. She is, underneath it all, despite all the protesting, just another woman looking for a man and wanting to settle down.
The author seems to be trying to portray Ezra as a fringe-of-society character, but he comes across as a whingeing self-absorbed oddity. I don't mind quirky characters, unlikable even, if they have something charismatic and believable in their portfolio of traits. But these two, along with Rebecca’s replacement for Ezra, are flat and uninteresting.
The major problem is the execution of the story, which is primarily told rather than shown, with swathes of dull backstory. The description feels distanced and lacking atmosphere. So much so, I struggled to remember where the story is supposedly set. It starts in the wrong place and lacks chronology and cohesion. It is an often out-of-sequence list of events that leaves the reader sitting confused on the sidelines of a game that lacks flesh, detail, rules or explanations.
The Stranger Game is a missed opportunity. It could have been dark, tragic, unexpected; a novel about social media ruling people’s lives, about omnipresent sites and fads that leave too many physically, emotionally and personally disconnected from families, friends and professional relationships. It could have been a terrifyingly feasible thriller about the already unstable elements in society having a bone-fide excuse for becoming stalkers.
But the story asks us to suspend disbelief and accept hard-working professional people becoming addicted to a game where they follow ditchwater-dull strangers around their city. These lawyers, architects, and developers lose their jobs over this unlikely game. Including a protagonist so addicted that she follows a young mom and her child buying chicken for dinner.
I finished the book in one fast sitting, but for all the wrong reasons. Even the ending is unsatisfying.