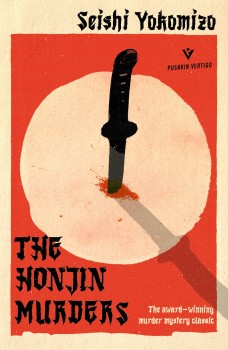 A newly-wed couple are found dead inside a house locked from the inside, with the weapon, a bloody samurai sword, stuck in the snow outside. Renowned detective Kosuke Kindaichi is on the case.

In the winter of 1937, the Japanese village of Okamura is agog with the news – the oldest son of the aristocratic Ichiyanagi family is getting married. The ceremony is performed on the family estate and the newly-weds retire to a separate annex house within the grounds.

But that very night the household are woken by screams and the eerie sound of the strings of a koto, a musical instrument. On investigation, they discover the annex locked from the inside, and on breaking in find the couple dead from sword wounds. The bloody sword is found outside stuck inside the snow, otherwise pristine, with no footprints evident.

What has happened is unclear, although attention is centred on a man seen around the estate before the ceremony, a sinister figure missing three fingers. The police make little progress and the uncle of the bride, who is temporarily resident, calls in amateur detective Kosuke Kindaichi, who has developed an impressive reputation despite his generally dishevelled appearance.

This Pushkin Vertigo issue is the first English translation of a book originally published in Japan in 1946, the first of a long string of Kosuke Kindaichi stories. The tale is narrated by the author, who makes no secret of his love for mysteries of the locked room murder genre. He mentions stories by Leroux, Leblanc, Scarlett and Dickson Carr, and specifically references The Red House Mystery by AA Milne, featuring the amateur detective Anthony Gillingham.

Given the above it is unsurprising that the general form of the book will be easily recognisable to those who appreciate murder mysteries from the West characteristic of their time, albeit with some exotic aspects arising from its setting. The features of the house, the dress of the occupants and the obsession with status of the senior members of the household are unusual, but otherwise much is reminiscent of a gathering at a country house as you might expect to find in the pages of Agatha Christie.

It is evident almost from the first moments of his arrival that Kindaichi has unearthed a few clues to follow, but the detective conceals his lines of thought so that most of his activities are very mysterious until, in traditional fashion, he assembles family members to explain how the deed was done.

For readers who feel they were unfairly denied crucial facts, the author points out at the end that certain matters were downplayed but were undoubtedly mentioned in the preamble. I didn’t feel that I had been unfairly deprived and freely admit that the clues were available to those looking out for them.