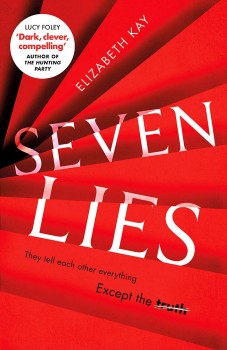 Jane and Marnie have been inseparable since childhood. And Jane will make sure that never changes, whatever it takes.

Even as adults, Jane and Marnie still have much in common, and live together in their London flat. Until Jane falls in love and moves out. Unfortunately, her love story is short and tragic, and just as it ends, Marnie too finds love, marrying soon after. Charles, Marnie’s husband, is everything Jane detests in a man – loud, obnoxious, a person who devours the space in a room with his insatiable ego. But she cannot tell her best friend the truth. She cannot tell Marnie how much she despises Charles. And that lie by omission will kill Marnie’s husband almost before the wedding confetti has settled.
The packaging of this debut novel unleashed my inner alarm bells before I even started the first page. Gimmicks may draw a potential reader’s eye, but it is the story’s substance that counts. Unfortunately, the packaging is indicative of the writing style, the plot and the padding. The whole thing is overdone.
There are many subplots alongside the drip-fed main plot - a plethora of subjects, including eating disorders, sexual assault, sibling and parental relationships, dementia and early widowhood. But they dilute the main story and, in some instances, almost feel incongruous, with no real or credible payoff.
The lead character, Jane, has no redeeming features, and there is no getting away from her as the story is written in the first person. She reminds me far too much of that now-hackneyed main character, Rachel Watson, from The Girl on the Train. Unreliable narrators I like. Unlikeable characters that have a redeeming feature, I will find a way of connecting with. But Jane is narcissistic, self-entitled and a totally miserable specimen. She could have dropped dead and I wouldn’t have shed a tear.
Most of the secondary characters are underdeveloped. The reader obviously only sees them through Jane’s eyes and from her egotistical point of view. This one-sided portrayal intensifies Jane’s character – another reason why it is impossible to connect with her.
The plot is interesting but far from unique, even though it is normally male characters who behave as Jane does. With the meat of the story exposed from the start, leaving little or no mystery, and with its long-winded build-up, the ending is unsatisfactory, almost unbelievable. It is as if the author got bored and played rock, paper, scissors to decide if there was to be redemption or retribution in the closing pages.
The heart of the story is a friend’s confession, entwined with grief and need of acceptance. And it does raise some interesting aspects of friendship, including difficulties when new partners threaten the dynamics, how it changes when babies come along and how some will see friendship as trumping all other relationships. It also proves how one lie can be the first of many, each one taking the liar further down a dark path.

Elizabeth Kay’s writing hints of better things to come, and I will look out for the next book, even though this one disappointed me. There are flashes of beautiful and evocative writing, albeit sometimes overworked. Other times, there is far too much tell and not enough show. And the dialogue is not always as crisp as it could be.