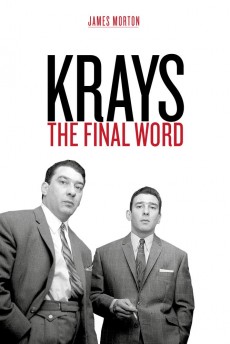 Madness, assault, robbery, arson, murder, protection rackets, murder – a new look at the rise and fall of the East End of London’s most notorious gangsters.

Twenty years after the death of the last Kray brother, Reggie, in October, 2000 – his ten-minute younger twin Ronnie died in March 1995 and older brother Charlie in April 2000 – the British public is still fascinated by the often fanciful stories surrounding the last of the great East End gang bosses and their reign of  murder, robbery, arson, fraud, protection rackets and assaults during the 1950s and 1960s.

In their lifetime, the twins and elder brother Charlie were minor celebrities themselves, photographed by David Bailey and interviewed on television. Their West End nightclubs were the haunts of politicians like Lord Bob Boothby and Tom Driberg, prominent entertainers such as Diana Dors, Frank Sinatra, Judy Garland and George Raft and sporting celebrities including champion boxers Freddie Mills, Terry Downes and Terry Spinks.

Behind the glitzy and flash exterior lurked a world of pain, terror and brutality as they ruthlessly ruled their ‘patch’ and fought off the competition from other gangs and the attentions of the police through a web of corrupt lawyers and detectives, and strangely compliant and supportive churchmen, all backed up by fear.

Prolific true crime author and former criminal defence solicitor James Morton – his previous books featured Detective Superintendent ‘Nipper’ Read: The Man Who Nicked The Krays, and ‘Mad Frankie’ Frazer, the dreaded 5ft 5” tall enforcer for the Krays’ south London opponents the Richardsons – attempts to unravel the truth from the legend that the Krays have become.

From the brothers’ East End beginnings and their early days as boxers, Morton attempts to cut through the conflicting versions of their career, using every available source – police and court records, testimony from former members of ‘The Firm’, newspaper stories and the recollections of those whose paths they crossed to produce an objective and conclusive account of their criminal activities.

The question is, how much of this is true. Morton admits that the ‘memories’ of former associates may well be tainted by the desire to either enhance or play down their own involvement. But in chronicling the twins’ rise and fall more than 50 years ago when they were each sentenced to 30 years for the murders of gangsters Jack ‘The Hat’ McVitie and George Cornell – then the longest sentences for murder handed down by a British court – Morton opens up as many questions as he answers.

What was elder brother Charlie’s true role? How many men did the twins either kill or order killed? Legend has it that almost every flyover in London built at the time houses the remains of one of their victims, said to total more than 30. What was their involvement, if any, with the ‘suicide’ of former light heavyweight champion Mills?

It’s all there – Ronnie’s incipient and growing madness, Reggie’s unpredictable temper and his obsession with his dead wife, Charlie’s attempts to remain in the background and urge at least some caution on the twins.

For me, this book is a re-run of my youth. The Krays were ever-present, largely feared, partly respected. I boxed at amateur clubs they sponsored. As a young soldier I drank in their pubs and clubs – always in full uniform, the patriotic Krays instructed their bouncers to allow a certain leniency to squaddies – and later as a crime reporter I knew and met many of those who feature in Morton’s story.

For readers not knowing the background, this startling trip around London’s underworld with its plethora of names and incidents will take some following. But if you’re interested in how three East End boys could exert such enormous power and influence, it’s well worth ploughing through.