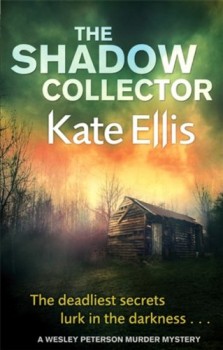 Lilith Benley has served 18 years in prison for the murder of two teenagers although she still protests her innocence. When a woman is found murdered nearby, it seems like the past isn’t going to stay buried.

I’m a very late convert to Kate Ellis’ murder mysteries set in the Devon countryside and featuring DI Wesley Peterson and his friend, archaeologist Neil Watson. I only came in with the 15th book in the series, and The Shadow Collector is number 17, so it’s hard to tell how the series and its characters has matured over time, but judging by my experience, there’s still plenty of life left in this engaging mix of crime and archaeology. After all, as Peterson observes, archaeologists are detectives in one shape or form.

When convicted murderer Lilith Benley returns to the scene of her alleged crimes at the aptly-names Devil’s Tree Cottage, she is still protesting her innocence, even in the face of her mother’s confession that damned them both. Two teenage girls were said to have been stabbed and fed to the pigs, and the Benleys’ conviction was secured both on the basis of the words of a confused elderly woman and on the presence of blood-stained clothing. It was seemingly an open and shut case, even in the absence of the bodies. But when another woman is found dead near the farm, suspicions are raised that Lilith Benley has killed again.

The investigation is complicated by the presence in the area of the filming of the so-called Celebrity Farm, and one of the contestants in the reality TV show promptly does a runner. Peterson has to entangle a complex web of truth and lies set against a dark background in which practitioners of Wicca are hard pressed to defend themselves, reminiscent of the 17th century witch-hunts in which neighbour accused neighbour and women – and men – were killed on the flimsiest of pretexts at a time when just being different in some way was seen as evidence against them.

Much as I like any books with archaeology as a backdrop, there were times when the sub-plot involving Neil Watson’s car accident felt somewhat shoe-horned in, as did the extracts from a series of 17th century journals, lending weight to the story of the discovery of some gruesome wax dolls stuck with pins, found during the renovations in an old manor house.

I suspect this might just be my prejudices showing here, as I tend to dislike anything that interrupts the main narrative, so I found I was increasingly skipping quickly over the interwoven extracts, and for me they contributed little to the story, despite the fact that the methods used by ordinary people to protect themselves against witchcraft and harmful spirits is a special area of research of mine. This is an area that could easily have been expanded to provide an interesting story in itself, rather than simply a means to foster Neil Watson’s involvement in the book. I was also somewhat sceptical about the release from prison of a woman who has steadfastly refused to admit her guilt. The English legal system is well known for keeping such people in prison, well beyond the expiry of their original term for just such a thing.

Towards the end, there were times when characters spent rather too much time discussing the plot in what I’ve come to describe as the classic breakfast at Southfork scenes in Dallas when the goings-on get helpfully recapped for anyone who hasn’t been keeping up. But just when I was starting to rail at this, another twist was neatly added to an already tangled skein, piling layer on layer of subtlety. It’s never wise to think everything has been neatly wrapped up, as Kate Ellis expertly proves.

Despite my occasional quibble, I do like the pairing of a black policeman with a scruffy archaeologist against the scenic backdrop of Devon and I’m looking forward to their return.