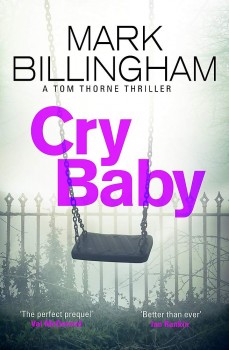 A seven-year-old boy has gone missing while playing with a friend in a wood next to a park, with his mother nearby. A police officer is determined not to have another child’s death on his conscience.

Tom Thorne made his first appearance in Sleepyhead, 20 years ago. I came late to the series in 2012, but since then, his books have always made it onto my to be read pile, apart from when I chickened out of The Killing Habit, based on the real-life case of the Croydon cat killer. And I do intend, at some point, to catch up with the earlier books in the series. So when the chance came to meet a younger, less experienced Thorne, I dived into this prequel with both feet and high hopes. I wasn’t disappointed.

The year is 1996. Tom Thorne is a detective sergeant who’s never quite been able to move on from a case where he ignore his gut instinct about a suspect with devastating results. He still gets veiled digs from colleagues but has learned to live with it. Then seven-year-old Kieron Coyne goes missing while playing with his best friend in the woods next to the park where his mother is chatting to a friend of hers. She only takes her eyes off her son for a few minutes, but it’s enough. Only one boy returns from the woods. All young Josh can say is that they were playing hide and seek. Despite an extensive search, there’s no trace of Kieron.

Cat, the boy’s mother, is distraught and can’t help resenting the fact that her best friend still has her son. Josh is safe, but no one knows what has happened to Kieron. Then a witness comes forwards to say that he saw a young boy walking down the road near the woods with a man and then getting into a car with him. His descriptions of the man and the car are vague, but it’s all that the police have to go on.

The idea of going back to an earlier stage in a character’s career is always an interesting one, but it’s a hard trick to pull off without the sort of obvious visual clues of a different actor that television can provide. The idea worked with RD Wingfield’s iconic detective Jack Frost in a series of books written after his creator’s death but, for me at least, was less successful when done by Bernard Cornwell with his equally famous Sharpe series as I never felt that he quite succeeded in invoking a younger, less experienced iteration of his own character. Here, Billingham succeeds in effortlessly selling to me this younger Tom Thorne. He’s not carrying as much baggage as he does in the later books. He’s less sure of himself, and his earlier failure is still painfully raw.

I enjoyed being a spectator at his first meeting with the irreverent, tattooed pathologist Phil Hendricks and watching as they made the first relatively tentative moves towards friendship. With the benefit of hindsight, I was waiting for the penny to drop with Thorne and was amused at his utter cluelessness and woeful lack of a functioning gaydar.

The investigation takes a couple of sharp left turns at times, but it never totally jumps the tracks. There’s a depth to Billingham’s writing that lifts his books to a higher level than many of his contemporaries and Cry Baby is no exception. The poignant story of Cat’s oddball neighbour shows how easy it is for stereotyping to get in the way of an investigation, especially one being played out in the media spotlight. I was with Thorne all the way, wanting there to be a happy ending for this missing boy, but knowing that Billingham is not one to sugar-coat a story to pander to readers’ hopes.

This Tom Thorne prologue is quality crime fiction that successfully returns the lead character to an earlier point in time without dragging back with him the experience that has naturally built up throughout the later books. With Cry Baby Billingham has delivered a police thriller that convinces on all levels.