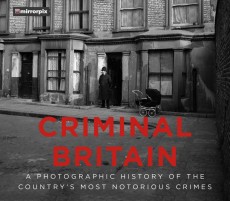 A look at some of Britain’s darkest criminal cases in a picture anthology from the files of the Daily Mirror.

This is a book for true crime nerds. In a genre which is growing in popularity – perhaps through morbid fascination – it is hardly a stand-out, although if you want to put faces and locations to some of the country’s most notorious crimes it serves its purpose.

This short – fewer than 150 page – photographic journey through some of the most infamous crimes of the last 100 or so years, uses black and white photographs from Mirrorpix – the picture archive of the Daily Mirror newspaper with a short caption for each.

I’m afraid to say it really didn’t do the job for me. For a start, ten years on the Mirror and ten before that as a crime reporter with the now defunct Thomson Newspapers means I’ve seen most of these before – in fact worked on one or two of the cases. Secondly, why produce a book and expect people to pay when they can actually view many of these pictures for free by visiting the Mirror website?

The names of some of those featured are enshrined in criminal legend, from the sensationalist trials of Dr Crippen, George Joseph Smith and Peter Sutcliffe to gang warfare and audacious bank and security vault heists. But for those who do not know the background to the crimes, there seems very little point in pictures of murder scenes, preening policemen or killers being led away in handcuffs.

A brief synopsis of each case would have undoubtedly been beneficial. A great deal more thought could have gone into this book, with better documentation and more carefully selected photographs. Having said that a few are really interesting. If you’ve ever wondered about the personalities of the legendary East End gangsters the Krays, their careful pose outside their Valence Road home about will tell you everything about them.

Ronnie looks exactly what he was – a psychopathic killer with a hair-trigger temper. So too does twin brother Reggie – hard, vicious and none too bright. Only elder brother Charlie, effectively responsible as ‘business manager’ for the day-to-day running of ‘The Firm’ which dominated London crime in the late 1950s and 1960s, presiding over armed robbery, arson, protection rackets and a series of extremely lucrative ‘long firm’ frauds, looks anything near normal!

As West End nightclub owners, the Krays mixed with politicians like Bob Boothby and homosexual Labour MP – homosexuality was then illegal – and KGB spy Tom Driberg and prominent entertainers such as Diana Dors, George Raft, Frank Sinatra, Judy Garland and Barbara Windsor. They became celebrities themselves, photographed by David Bailey and interviewed on television.

They were arrested in May 1968 by a Scotland Yard team led by Detective Superintendent Len ‘Nipper’ Read – who self-consciously poses with his detectives a few pages later – and convicted the following year. The twins both received life sentences for the killings of South London gangster George Cornell, a member of the rival Richardson ‘team’ and Jack ‘The Hat’ McVitie, one of their own gang.

Ronnie remained in Broadmoor Mental Hospital until his death in 1995 and Reggie was released from prison on compassionate grounds in August 2000, nine weeks before he died of cancer.

Despite a noble effort in a two-page foreword by Simon Farquhar and sections featuring major robberies – incidentally, to describe self-deluding Bruce Reynolds as the ‘mastermind’ of the Great Train Robbery is total rubbish – serial killers, mass murderers and inevitably the terrorists of the IRA and various extreme Islamist factions, this photographic essay fails to grip.