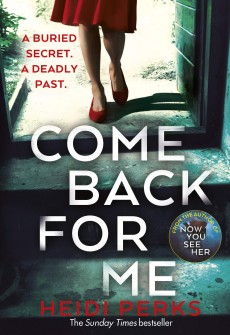 Come Back For Me

Questions compel Stella to return to the island when she sees the TV report that someone has found a body at the bottom of her childhood garden.

Twenty five years ago, at the end of the summer of anomalies and childish arguments, Stella’s father drags the entire family off the island they have called home since before the 11-year-old’s birth. That he does so on his ill-equipped ferry in a cursing storm despite the children’s fears, is imprinted on Stella’s memory. Something bad must have happened on Evergreen Island that forced her father to put his family in such danger.
Now the family is no more. Stella’s mother is dead. Her father had remarried but has dementia. Her sister, Bonnie, a recovering alcoholic, is married with two children. And Stella hasn’t seen her brother Danny for 18 years. Moving from the island cost them all dearly, but when a body is uncovered, questions flood Stella’s head. Questions only the island’s inhabitants can help answer. She returns, imagining a warm welcome. Nothing could be further from the reality. The islanders treat her like a leper. And the closer to the truth she edges, the more menacing the threats become.
When I open a novel, I am asking the author to hold my suspension of disbelief delicately in their hands and keep its heart beating through the use of convincing description, plausible ‘facts’ and vibrant characters. Whether a milieu exists or not is irrelevant if the author has done sufficient research and applied common sense. My first problem with this novel is the ‘remote’ Evergreen Island. It’s supposedly less than 30 minutes from Poole Harbour, but without any 21st century connection to the outside world. There’s no phone signal and no internet (except, conveniently in the café). And apparently it’s too far for the protagonist to visit in 25 years, even though she only lives in Winchester.
My second problem is the protracted – in places, painfully slow – unravelling of the story. Introspection and the he-gasped-she-snapped dialogue are awash with tautology and melodrama, often the content going around in ever-decreasing circles. So much so, it feels as if there is at least 100 pages of padding scattered in between the plot that cheats the reader into believing they are on a journey, when a few paragraphs or pages later, they are back where they started having made no headway. The book needs a sharp pair of scissors and ruthless editing.
I love dysfunctional families. I love dishonesty. In fiction. But there is a lack of credibility in the dynamics between Guilt-Trip-Bonnie and Rose-Coloured-Spec-Stella. Bonnie’s alcoholism is a convenience. I am sorry, but I find it impossible to believe that a recovering alcoholic can hop on and off the wagon with such ease at the behest of a younger sister she has little respect for or sympathy with.
That Stella has never truly bothered to find her beloved brother Danny in 18 years just made me dislike her even more than her I-am-a-ridiculously-naïve counsellor behaviour and thought process had already done.
Come Back for Me is an easy, but underwhelming read. It leans heavily on drip-feeding facts in amongst swathes of pace-halting backstory to boost suspense. But it also relies on inconsistent and unbelievable behaviour from its characters and too many about-turns. The end result is a sense of trickery rather than clever foreshadowing or subtle clue-dropping for the all too obvious ending.